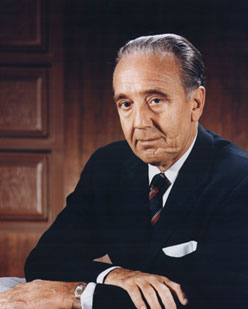 Born in Frankfurt, Germany, in 1908, Debus' education and rocketry experience in his home country landed him in the post-World War II ballistic missile systems development program in the U.S. He and about 100 German colleagues, led by rocket pioneer Wernher von Braun, worked first at Fort Bliss, Texas, before relocating to Huntsville, Ala. Their work became the focal point of the Army's rocket and space projects and Cape Canaveral became their launch site.

Debus came to the Cape in the early 1950s to set up a launch site, and permanently moved to the area with his family by the middle of the decade. By 1960, the Army Ballistic Missile Agency was transferred to the National Aeronautics and Space Administration. On July 1, 1962, the Florida launch facility at Cape Canaveral was officially designated as NASA's Launch Operations Center (it was renamed to honor the fallen president just after his assassination in 1963) and Debus was officially named its first center director.

By that time, construction of the spaceport under Debus' leadership was well under way. While the space hardware was under development, physical structures like the launch pads and the Vehicle Assembly Building rose on what had been coastal wilderness. 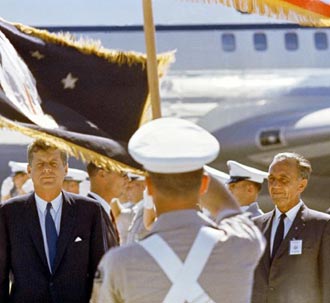 Image at Right: After arriving at Cape Canaveral Missile Test Annex in September 1962, President John F. Kennedy was welcomed by a color guard and Debus (right), director of the Launch Operations Center that would be renamed to honor Kennedy after his assassination the following year. Image credit: NASA

Amid the flurry of building facilities and developing rockets that would take men into orbit and on to the moon, Debus had the forethought to consider the natural environment that surrounded the center. He arranged for the U.S. Department of the Interior to establish and maintain a wildlife refuge at the space center. Thanks to his efforts, the 140,000-acre Merritt Island National Wildlife Refuge exists today.

With growing pride and enthusiasm on the part of the public toward the space program, Debus secured support for the first visitor center, as well.

By the time Debus retired as center director in 1974, the list of human space achievements under his leadership represents some of the greatest in U.S. history. Among them: 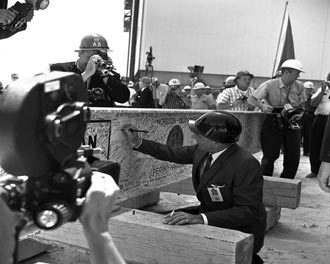 Image at Left: Cameras record the moment in May 1965 as Debus adds his name to the thousands of signatures affixed to the 38-foot-long steel beam used to complete the 52-story Vehicle Assembly Building. Image credit: NASA

To this day, the landmarks accomplished in less than 20 years -- from early rocket testing to man's first footprint on the moon -- are still astonishing.

After leaving the space center in 1974, Debus continued to live in nearby Cocoa Beach until his death in 1983. Despite the vast accomplishments that occurred under his watch, his daughter, Sigi Northcutt, said he always emphasized that teamwork made it all possible. "He did not take credit himself; he felt it was everybody's baby," she said.

Northcutt describes her father's legacy in more down-to-Earth terms: "His main purpose in doing what he did was to further mankind's standard of living and standard of knowledge." She adds that he'd be proud to see all the everyday benefits that have come from the space program. 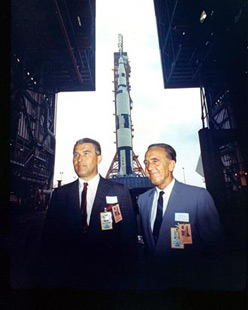 And what would her father think of the direction of space exploration today? "I think he'd be very excited about going to Mars, the prospect of going back to the moon, and going into outer space and discovering the universe," she said.

So it's fitting that the developments Debus helped mastermind in both facilities and rocketry live on today at the Kennedy Space Center, helping to usher in NASA's new goals to go back to the moon, then travel to Mars and beyond.