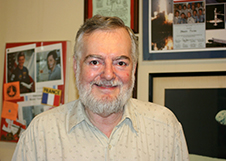 At the age of 14, Jacques Tiziou began his career with stories in European publications about model airplanes, and quickly transitioned into rocketry when the United States and Soviet Union announced plans for Earth orbiting satellites. By age 17 his stories, three-dimentional drawings and photography had appeared in a number of European aviation magazines, including the famous French journal, "Les Ailes."

By 1962, he had a college degree in hand as an aerospace engineer from ESTACA, the same university Igor Sikorsky graduated. But Tiziou decided that journalism, both written and broadcast, was his true calling.

Upon graduation, he traveled to the United States to spend a month visiting NASA centers and space industry plants.

On July 10, 1962, during his first visit to NASA's Kennedy Space Center and Cape Canaveral, he covered the first launch of an active communications satellite, TELSTAR. The original TELSTAR was a part of a multinational agreement between AT&T, Bell Laboratory, NASA, the British General Post Office and the French National Post, Telegraph and Telecom Office, to develop experimental communications over the Atlantic Ocean.

His visit to Langley allowed him to fly the first lunar landing simulator. In Houston, he walked in the fields among the cows where the Manned Spacecraft Center was to be built. And in St. Louis, McDonnell public relations executives put him on board the Gemini capsule a few hours before John Glenn, Scott Carpenter and "Deke" Slayton saw it for the first time.

Throughout his career, he traveled to the many NASA centers and contractor plants but had a special affinity for Kennedy Space Center. He even established an office in Cocoa Beach, Fla., and installed his brother, Michel, from 1942-1994, as his resident representative of "Space-ialists." In true journalist tradition, the office was a very small apartment with dying window air conditioners. Transportation was a very old Volkswagon Beetle.

In 1965, in addition to his work as a reporter, he became editor-in-chief of the first "Space Encyclopedia" for Editions Rombaldi. It was published in 1968 in several languages including English. A year later his book "A l’Assault de la Lune" was published. Several well known people in broadcasting, journalism, government and industry credited it with helping shape their careers, including Jean-Yves Le Gall who became chairman of Arianespace in 2002.

At the end of the 1960s, Tiziou was covering only the Apollo program for numerous press organizations, including the only two French TV channels existing at the time.

He lived in Cocoa Beach until the end of the Skylab program when contracts to cover the White House and Congress for French and Canadian news organizations mandated that he relocate, but he continued to travel to the cape to cover space news until his retirement and continued to return through the last space shuttle launch.

American reporters call them "scoops" but to Tiziou, they are "premieres," and he had scores during his career. Yet many of them are not the kind ordinary journalists cite.

Tiziou was the first to show the world, in Space Business Daily, the configuration of the first Soviet standard launch vehicle called Zemiorka, which began the family of vehicles including Vostok and Soyuz. His 3-dimensional drawing was used in Soviet publications as the official plan for the Vostok, as well as in western publications.

He was the first European to ride a crawler-transporter carrying an Apollo rocket to the launch pad and the space shuttle prototype, Enterprise, to the pad for testing in 1980, and was the only European to drive the Lunar Rover One-G trainer at Kennedy.

More than 100 astronauts have visited him in his home, and Joseph P. Allen was his best man at his wedding.

He has been the official launch commentator for Ariane launches and was the only French citizen to do an official "wake-up" call to astronauts during the Skylab missions. He used the song "Come Back My Love," by Brigitte Bardot as part of his transmission.

Disney World is another of Tiziou's favorite areas to cover because of its high tech approach to entertainment of its guests. There he was able to combine his interest in marine wildlife when he was one of the first divers in the living seas exhibit. He visited Disney World more than 100 times and dove with the sharks, porpoises and 6,000 other fish a number of times.

Tiziou was elected to the French National Academy of Air and Space in 1993.