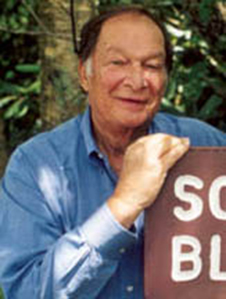 Julian Scheer, assistant administrator for public affairs, was responsible for shaping the structure and policies of NASA during the 60s and early 70s into a team approach which persists even today. He also was largely responsible, as the Washington Post reported, for, “… getting the astronauts out of their flight suits and into the public consciousness as avatars of American 'can-do' spirit.”

Scheer also crafted NASA's outreach into classrooms across the country using the lessons of space exploration to excite and inspire millions of students.

A hands-on leader, Scheer spent much of his time in the field with the public affairs teams at the various NASA centers, but he also was a strong force in shaping NASA policy. Frank Borman, an Apollo 8 astronaut, said in an interview, “The (Apollo) program was really a battle in the cold war and Julian Scheer was one of its generals."

After the successful moon landing in 1969, Scheer led his team in exploiting its public relations potential. He orchestrated and led round the world tours. In an article he wrote in USA Today in 1999, he said, "The Apollo mission was the chance to show off U.S. technological superiority. Clearly the Russians were going to the moon. We were head-to-head. We emphasized that.”

Born in Richmond, Va., he worked on local newspapers there. During World War II he served in the Merchant Marine in both the Atlantic and Pacific oceans. He is a graduate of the University of North Carolina at Chapel Hill and was a spokesman for the university’s sports programs in the 1940s and 50s before joining the Charlotte News as a reporter. While covering the presidential election he got to know Robert F. Kennedy and was asked by Kennedy at the end of the Mercury program to create a framework for the NASA public affairs program. Eschewing single spokespeople, he expanded the pool of people reporters could talk to engineers and technicians as well as managers. He was backed by then Administrator James Webb in requiring astronauts to be available at times other than occasional press conferences.

Scheer attended both manned and unmanned launches at NASA's Kennedy Space Center, insuring he had first hand knowledge of the needs of the media, VIPs and general public and insured that the necessary resources were there.

He was responsible for naming the Apollo ll command module "Columbia," arranged for television coverage of the landing and participated in discussions over whether the astronauts would place a U.S. flag on the moon. He also helped write the wording on a plaque on the Lunar Module that reads in part, "We came on Peace for All Mankind." President Nixon wanted to insert a mention of God. Scheer objected but told a presidential aide that it would be changed.

In 1999, he wrote in an article for Space.com, "In the rush of events, no one would remember…the plaque that has been resting on the Sea of Tranquility for 20 years in the original without the benefit of President Nixon's editing."

Leaving the agency in 1972, Sheer served as campaign manager for North Carolina Democratic Senator Terry Sanford's unsuccessful presidential campaign. Afterwards he worked with a Washington communications consulting firm until 1976 when he was named vice-president of LTV Corp., in charge of running its Washington operations. Scheer was the public face as LTV antitrust action during the Reagan administration, bankruptcy and reorganization and an unfavorable Supreme Court ruling. He returned to consulting in 1992.

An environmentalist, he was a key strategist in the Piedmont Environmental Council's successful fight against Disney America. He was a co-founder of Protect Historic America, a group that organized opposition to Disney's proposal.

Scheer died in a tragic accident at his home in Virginia in September 2001. He is survived by his wife, Sue, and two daughters.