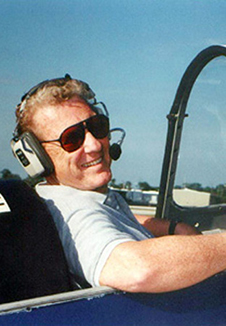 Bill Larson's career as a communicator, broadcast journalist and news director spans more than four decades, virtually all of them related to the space coast or space program.

He was born in the small Wisconsin town of Chippewa Falls on July 27, 1933 but after high school and two years at Wisconsin University at Eau Claire, he was in danger of being drafted because of the Korean War. Spurred by this powerful incentive he enlisted in the Air Force and began a journey that would bring him to the space coast for training at Patrick Air Force Base and marriage to a Cocoa Beach woman. Although he was next sent to Germany to teach English to former Luftwaffe pilots, he came back to the space coast when his enlistment was up.

Possessing a rich, dramatic voice it was only natural for him to go to work in radio, television and movies. WKKO in Cocoa was the first of a string of stations and the place where he had the chance to cover the very early rocket launches of 1957. After brief sojourns to stations in Colorado Springs, Omaha and Amarillo, he was hired as news director for WMEG in Melbourne, Fla., where he helped set up a news service called CKSN to supply stations throughout the southeast with launch coverage of manned missions beginning with Gemini. The service also helped newsmen get needed rest by providing space mission coverage every 15 minutes. Following the demise of CKSN Larson worked for other area radio stations providing the same type of coverage through the Apollo 11 moon landing. That meant news people, with the exception of Larson and his partners, could go home or back to the motel and still keep track of the latest happenings.

Larson's nose for news was not simply confined to the space program. In the mid-1960s he knew Disney was quietly buying up land outside of Orlando but was closed-mouth about the project. Based on research underway into potential living quarters on the moon and on some trips being taken by county commissioners, Larson reported that Disney had a “domed city” of the future on the drawing boards. None of the other media, with the exception of the Melbourne Times, picked up the story since Disney was not announcing it…but two years later Disney had a big press conference in Orlando to announce just such a project.

On the other hand, Larson refuses to divulge the identity of the hapless radio broadcaster who could not ad lib. As a result the unnamed news announcer always read from a prepared script. When the engines on one Titan rocket during Gemini were ignited, he read his "lift-off" as though the manned rocket was soaring skyward. Unfortunately the engines had shut down before liftoff…so thinking quickly and recalling he had seen something about hold-down arms, he smoothly continued, reporting that two giant hold down arms had reached up and brought the rocket safely back to the pad.

By 1970, Larson's expert broadcast reporting of America's space program had reached ears in New York and he was hired by ABC Radio to anchor their regular news broadcasts and continue coverage of the space program. During his 10 years at ABC News in New York he provided live "pool" coverage of "splashdown" recovery operations in the South Pacific for two of the Skylab missions and the Apollo 14 mission for the major broadcast networks and anchored other Apollo launches from NASA's Kennedy Space Center for ABC. Serving as ABC co-anchor with Merrill Mueller, Larson provided continuous coverage of the second inauguration of President Nixon. Larson also anchored 20 newscasts per week on the ABC Radio Network.

In addition to his news work he has appeared in several TV shows, movies and as on-camera and voice-over talent for many documentaries and commercials. More recently, as a retiree, Bill has devoted his time to writing and narrating numerous video scripts for such clients as Johnson Controls, U.S. Air Force, NASA and Communications Concepts. In several cases he also acted as producer/director or co-producer. One of Larson's recent projects was the documentary "John Glenn Recalls the Flight of Friendship Seven." He wrote and narrated the script after spending several hours interviewing John and Annie Glenn. It has won three awards at the Florida Film Festival and was entered in the fall 2003 Hollywood Film Festival. Larson has four grown sons, resides in Cape Canaveral and pretends the Mousetrap is still in Cocoa Beach.