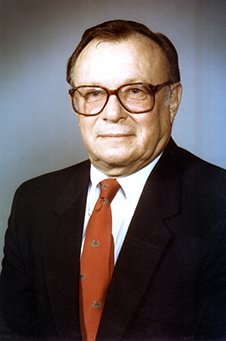 Briefly the news chief at NASA Headquarters in Washington shortly after it was formed, Edward Harold "Harry" Kolcum went on to be the managing editor and later the senior editor of Aviation Week and Space Technology magazine where he spent 33 years. Perhaps more importantly, he was a friend of news people, aeronautical and space workers and executives alike. As a matter of fact, there probably wasn't anyone who knew him who didn't like him.

Born in Cleveland, Ohio, his family moved to Virginia where he graduated from Hampton High School and entered the U. S. Navy during World War II. When he returned to Virginia, he entered the University of Virginia and graduated with a degree in English in 1948. He soon found a job as a reporter on the Newport News Daily Press and frequently found himself covering stories at NASA's Langley Research Center. It was during this time, Kolcum has said, that he became interested in aeronautics.

Altogether, Kolcum spent 11 years on the Daily Press with brief interruptions when he was recalled during the Korean War and a stint as public information officer at Langley Air Force Base.

In 1959, he joined NASA in Washington as news chief but the following year decided he would rather be a reporter and went to work for Aviation Week. By 1963, he was chief of the Washington Bureau. His stature as a space expert was even recognized in Hollywood. In 1965, he was hired by David L. Wolper Productions as the technical advisor for its documentary "Race for the Moon." In 1967, Kolcum became Aviation Week's European editor based in Geneva, Switzerland. Five years later he was promoted to managing editor of the magazine.

Although he had many trips to NASA's Kennedy Space Center, he came to live in Cocoa Beach in 1980 when he was named senior editor for the southeastern U.S. just in time to prepare for the first launch of the space shuttle. Until his retirement in 1993, Kolcum's experience, insight and nose-for-news allowed Aviation Week to stay in the forefront of in-depth space reporting. His expertise and contacts were particularly effective in the hectic days following the Challenger accident.

Kolcum received many awards during his career. In 1992, he was honored by the Aviation/Space Writers Association with its Lyman Award for lifetime achievement. However, he probably would be proudest of an award named in his memory presented annually by the National Space Club Florida Committee for outstanding reporters and public affairs people in the space field.

Kolcum passed away from cancer August 15, 1994, and is survived by his wife "Eddie" and three children.