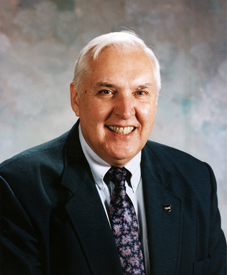 Called "The Voice of NASA" for many years by the world's television networks, Hugh Harris devoted 35 years with the National Aeronautics and Space Administration to telling the story of the United States space program.

Although he is best known to the public for his calm, professional commentary on the progress of launch preparations and launch of the space shuttle, his primary accomplishments were in directing an outreach program to the general public, news media, students and educators, as well as business and government leaders. As the third director of Public Affairs for NASA's Kennedy Space Center, he built on the groundwork of Gordon Harris and Chuck Hollinshead by overseeing the largest major construction program in the history of the Kennedy Space Center's visitor complex and tours that have hosted more than three million visitors a year. The Saturn V Center, which was part of that new construction, won the Award for Outstanding Achievement from the Themed Entertainment Association in 1997. He also is particularly proud of his role in the creation of "The Chroniclers."

The recipient of two NASA Exceptional Service Medals and the NASA Equal Opportunity Medal, he is most pleased with being included in more than 25 group achievement awards.

Harris began his career as a member of the news media. He worked as a reporter and broadcaster for radio station WMTR in Morristown, N.J., and as a reporter, photographer and bureau chief for two newspapers. From 1961 to 1963, he was a writer for internal and external house organs for Standard Oil of Ohio.

Since retirement in 1998, he has shared his NASA experience and lessons learned with nuclear industry leaders through conferences held by the United Nations' International Atomic Energy Agency in Europe and Japan and in this country through the Nuclear Energy Institute.

He also has been consulting in the fields of contingency planning, business management and public relations. He is presently serving on the Board of Directors of the Florida chapter of the NASA Alumni League and on an advisory board to the Brevard Community College Planetarium.

A graduate of Western Reserve University in Cleveland, Ohio, he and his wife Cora reside in Cocoa Beach, Fla.