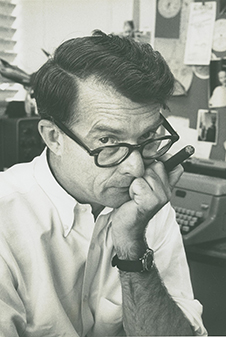 "The Invisible Man." You knew who he was when you saw the "TIME" placard pasted to his desk in NASA Kennedy Space Center's News Center.

When there was a news briefing in the auditorium, you could spy him way, way back, on a chair in the last row.

He was self-effacing, never asked questions during a press conference, and never stormed the briefers when it was over.

That was Jerry Hannifin, TIME's chief aerospace correspondent, who covered the first 120 space shuttle launches and wrote a number of space cover stories for the magazine.

How did he get inside information, beyond NASA's news releases? Like all good reporters he carefully cultivated his sources and never betrayed a confidence.

Because Jerry was held in such high esteem, he was selected to lead to delegations of other prominent journalists to aviation and space installations in the old Soviet Union.

He earned the respect of his fellow reporters. When Jerry died, one of his colleagues summed up their views: "Jerry was a giant in the field of aerospace journalism, much of it due to the accuracy and ethics in all his work."

But space was only one of Hannifin's interests. Aircraft and undersea craft were two others. He interviewed aviation giants ranging from Igor Sikorsky to stealth aircraft designer Kelly Johnson. He was an expert on South American politics and served as editor of the Spanish edition of LIFE magazine. He was there during the Cuban revolution and spent several days with Castro.

He lectured on Soviet aerospace technology at the National War College.

Jerry collected more awards than would fit on his office wall, honors bestowed by professional organizations and academia such as Columbia University.

Jerry graduated from Boise, Idaho State University, and then earned degrees in Journalism and English from the University of California, Berkeley. He paid for his education by working first for the Boise Capital News and then for the United Press wires service while at Berkeley.

He was also an accomplished pilot, flying anything with wings, from small general aviation aircraft to the B-52 bomber and the F-18 Hornet jet fighter.

Jerry is survived by his wife, journalist Sue Butler, a daughter, Consuela Jacob, a stepdaughter, Penny Bowman and a legacy of influencing many young reporters through his lectures and friendship.