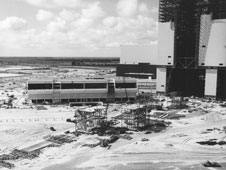 Image above: In the shadow of the massive Vehicle Assembly Building (under construction at right) the Launch Control Center nears completion in February 1965. Image credit: NASA › View larger image 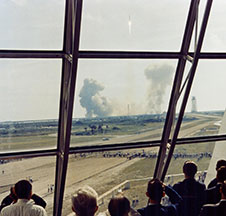 Image above: The launch of Apollo 11, the first moon-landing mission, is seen through the massive firing room windows on July 16, 1969. Image credit: NASA › View larger image 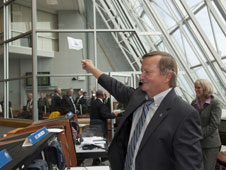 
As the hub of launch operations at NASA's Kennedy Space Center in Florida since the Apollo program, the Launch Control Center (LCC) has played an integral role in NASA's human spaceflight programs for nearly 50 years. The four-story facility was constructed at the southeast corner of the massive Vehicle Assembly Building in the Launch Complex 39 area of the spaceport, and stands just a few miles from Launch Pads A and B, the pads used for both the Apollo and Space Shuttle programs. Designers of the launch control facility included a great deal of flexibility in the plan of the four firing rooms, which has assisted in the implementation of varied requirements through the intervening years as technology developed and the nation's space programs changed. The ground rules for the design of the LCC were established by the Manned Space Flight Management Council in June 1962. Although the original plans specified a steel structure, the final choice was reinforced concrete, in accordance with the recommendation of the structural engineers, who viewed concrete as better for acoustical purposes. The massive double-paned windows were made of special heat and shock resistant glass and extend the full width of the east wall of the four firing rooms, providing a full view of the launch pads. The LCC opened for operation in early 1965. Designed to be a symbol as well as functional, the facility won the 1965 Architectural Award for the Industrial Design of the Year. The first, second and fourth floors of the LCC house offices, conference rooms, and various system and computer control centers. It is on the third floor that the four multilevel firing rooms are located. It was from these firing rooms that the final checkout of each launch vehicle built to carry astronauts was conducted. Once a vehicle received the "go" for launch, the firing room personnel were responsible for the supervision and control of the liftoff and vehicle until it cleared the launch pad towers. It was then that mission control at Johnson Space Center in Houston assumed control of the vehicle. The LCC was originally built to provide the checkout and launch function for the Apollo program, and after it was updated, the facility continued that duty for the entire Space Shuttle Program through the last launch on July 8, 2011. On Jan. 21, 2000, the LCC was listed in the National Register of Historic Places based on its significance to the Apollo and shuttle programs. In 2006, the newly revamped Firing Room 1 was named in honor of the first two space shuttle astronauts, Commander John Young and Pilot Robert Crippen. The renaming was in tribute to the 25th anniversary of that first space shuttle flight, STS-1, on April 12, 1981, dedicating the firing room that launched that historic flight. Today, the LCC is undergoing its latest metamorphosis in preparation for the next chapter of U.S. space history. The firing rooms are being modified to oversee processing and launches of a new generation of rockets and spacecraft. The agency’s Ground Systems Development and Operations Program is coordinating the changes in the firing rooms as part of Kennedy's centerwide refurbishment of launch systems and facilities. The changes taking place in the Launch Control Center will enable it to play a significant and changing role in the operations of future missions for NASA and private companies as new strides are made to explore space. Cheryl L. Mansfield
NASA's John F. Kennedy Space Center
› Back To Top