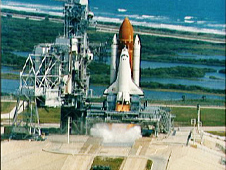 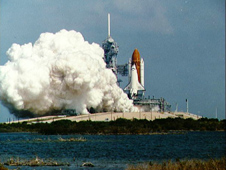 
It's déjà vu for NASA this spring as the much-anticipated SpaceX launch for NASA's second Commercial Orbital Transportation Services, or COTS, demonstration flight approaches from Space Launch Complex-40 on Cape Canaveral Air Force Station. Twenty years ago, a similar launch campaign was under way in Launch Complex 39 at Kennedy Space Center for space shuttle Endeavour's first launch. " 'Test as you fly, fly as you test' mentally has always been good to us. Test is the best control or mitigation for hazardous conditions that could impact the mission," said Jorge Rivera, Vehicle Integration and Operation chief engineer. "Subsystems that tested fine in isolation may interface with each other in a different way, which could create a bigger problem." Endeavour was commissioned to replace shuttle Challenger, destroyed in an accident in 1986. Construction began in 1987, and it rolled out of the assembly plant in Palmdale, Calif., in April 1991. One of the most important milestones leading up to the first launch of any new spacecraft is a test to validate the overall performance of its main propulsion system. In the case of the shuttle, the test was known as a Flight Readiness Firing, or FRF. "On every FRF that we conducted, we learned something new about the vehicle which made our process and flight hardware better,” said Rivera, who was deputy shuttle processing chief engineer at the close of the Space Shuttle Program. "It’s definitely a good practice in reducing the risk of the actual flight." The fueled test involved igniting the shuttle's main engines during a launch countdown to verify their performance while operating under the extremes of cryogenic conditions. The FRF was the first opportunity for the engines to perform in a clustered flight configuration although each had been test fired individually before they were delivered to Kennedy. The FRF countdown was terminated after 22 seconds. The primary differences between the test and a launch-day countdown were that the two solid rocket boosters were not ignited and no flight crew was on board. When an FRF was completed, any problems with the ground support equipment were identified, as well, and the launch team had experienced a full-scale dress rehearsal. During Endeavour's FRF on April 6, 1992, before its first flight, irregularities were detected in two of the three new engines' high-pressure oxidizer turbopumps during the 22-second firing. A buildup of pressure in one of the engine's pump preburner was detected just after it was shut down, and a slightly elevated frequency in vibration in the ball-bearing cage was recorded in another. Although the irregularities would not have been a safety concern if the FRF had been an actual launch, all three of Endeavour's main engines were replaced with ones that had previously flown. The precautionary measure caused no impact to the launch date. Thanks to the FRF, Endeavour's maiden launch took place when all of its systems were "go," at 7:40 p.m. EDT on May 7, 1992. On April 30 of this week, Space Exploration Technologies, or SpaceX, one of NASA's commercial partners, conducted a two-second static fire test of the Falcon 9 rocket's nine Merlin engines in preparation for the upcoming COTS launch. On the first attempt, the exercise was aborted 47 seconds before engine burn because an unspecified technical parameter was set improperly. The problem was addressed, and the test was successfully completed a little more than an hour later. The data collected will be analyzed before the demonstration flight later this month. "I'm glad that our commercial partners are following the same customary engine firing test before committing a new vehicle to launch," Rivera said. "I'm sure that is going to be the case for SpaceX, as well." That analysis is invaluable to prevent costly delays and even the loss of the vehicle, Rivera said. The data collected during the engine firing before Challenger's first flight is a case in point. Challenger's main engines were the first qualified to perform at 104 percent of their rated power level. When an unusually high level of hydrogen was detected in Challenger's engine compartment during its FRF on Dec. 18, 1982, a second FRF was conducted a few weeks later to provide more data to pinpoint the problem. During post-FRF troubleshooting, technicians found a crack in the main combustion chamber of one engine. Examinations of the other engines found that some had similar cracks in a 1/2-inch line that carried hydrogen gas into a small augmented spark igniter chamber located in the center of the engines' injector. Chaffing of the line was seen in all the engines that had been run for long durations. All three of Challenger's engines were removed and repaired in the Vehicle Assembly Building before its carefully monitored liftoff April 4, 1983. The future holds more variations on the tried-and-true propulsion tests as NASA and its commercial partners get ready to fire up their engines. 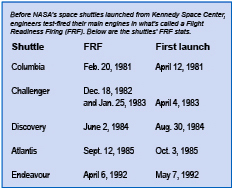