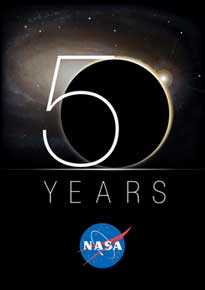 Oct. 1, 2008 marked the 50th Anniversary of NASA, as it was on that date in 1958 that the National Aeronautics and Space Administration began operations. During the past 50 years, the employees of America's space program have been at the forefront of many incredible accomplishments.

Kennedy Space Center has a rich history in the space program, having been named an independent NASA installation in 1962. From the historic launch pads in Florida, we have launched missions of discovery.