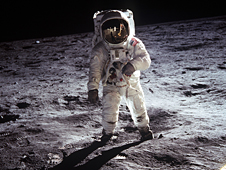 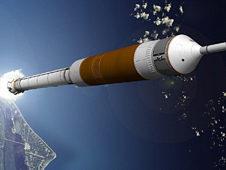 We've done it before, and we're on the brink of doing it again.

In 1961, President John F. Kennedy said, "I believe that this nation should commit itself to achieving the goal, before this decade is out, of landing a man on the moon and returning him safely to Earth."

Just five months shy of the end of the 1960s, NASA rose to President Kennedy's challenge.

On July 16, 1969, a Saturn V blasted Apollo 11 through the blue sky above Kennedy Space Center. The crew traveled through space, looking back at Earth and arrived in lunar orbit on July 19.

Angelo Taiani worked for Kennedy's ground support operations during the Apollo era and recalls the long hours he put in to support the Apollo 11 mission.

"I worked 24 hours straight the day before liftoff," Taiani said. "I had nothing to do once they got into transorbit, but I stayed up for another 17 hours waiting for the lunar landing to happen. I knew how much fuel they had, so I thought at any moment they were going to abort the mission. But there was a big sigh of relief for me, as well as mission control when we heard the words 'touchdown.' "

The world watched as Neil Armstrong slowly climbed out of the lunar module, named "Eagle," stepped out onto the moon and said, "That's one small step for a man, one giant leap for mankind."

While Command Module Pilot Michael Collins remained in lunar orbit, Armstrong and Buzz Aldrin spent 21 hours on the moon, posting the U.S. flag, taking notes and photographs, and drilling and gathering 46 pounds of moon rocks, which they brought back to Earth.

"I was so darn tired, but I stayed up anyway watching Armstrong and Aldrin take their first steps on the moon," Taiani said. "Then, I finally fell asleep."

Taiani is now retired, but continues to volunteer at Kennedy. He, along with thousands of other NASA alumni, anxiously wait for the day we make history again.

"It's got to be different if we're going to go to Mars. I was involved with plenty of studies that showed it would take six months to get to Mars and another six months to get back, but the moon is a great taxi hub for the mission," Taiani said.

In the next decade, NASA will go to the moon again, as well as travel to Mars and beyond with the Ares and Orion spacecraft. And it's expected to be anything but easy. Rebecca Sprague
NASA's John F. Kennedy Space Center
› Back To Top