Flow Director Eager to See Atlantis Fly
Recalling her early school years, Angela Brewer said working at Kennedy Space Center was not in her realm of possibilities. But a chance encounter with a NASA recruiter in 1983 while attending the University of Miami set her on the path to her current position of NASA orbiter flow director for Atlantis. 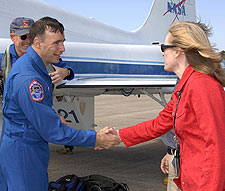 Brewer, whose career spans 23 years at Kennedy, is responsible for the day-to-day flow of Space Shuttle Atlantis, also called OV-104. She moved into her current position in 2006 after working for eight years as a lead in orbiter project engineering.

Prior to that, Brewer worked in navigation aids for shuttle processing engineering for 14 years. "It was a good learning experience. I really liked working with such a great group of engineers," Brewer said. But preparing Atlantis for launch on mission STS-117 was not without its challenges.

"There's never a dull moment," she said. But she is also quick to state that the job is very enjoyable, mostly because of the orbiter processing team, which includes NASA, United Space Alliance and Boeing employees.

According to Brewer, processing work included inspecting all of the orbiter's tile and gap fillers and replacing or repairing 151 tiles and blankets. Also, technicians developed an on-vehicle technique to repair the nose cap of Atlantis from damage received during mission STS-115 in September 2006. 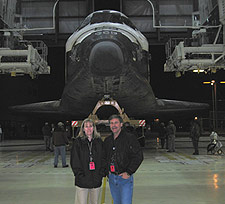 Workers also repaired a section of Atlantis' payload bay area which had been damaged by micrometeorite orbital debris during the same mission. Prior to rollover to the Vehicle Assembly Building on Feb. 7, Atlantis had been in the Orbiter Processing Facility for 138 days.

Image right: Brewer's task is to watch over Space Shuttle Atlantis as it is readied for mission STS-117. Alongside her is USA Senior Vehicle Engineer Dan Johnson. Photo credit: NASA/KSC

Brewer said everyone worked long hours to prepare Atlantis for mission STS-117. "A lot of people sacrifice to make sure the orbiter is ready to fly," Brewer said. "I feel it's a privilege to get to do the work we do here."

Even with the recent hail damage that postponed launch, Brewer said, "It will be a challenge, but we will work through it." She looks forward to seeing the shuttle roll back out to the pad for the STS-117 launch.

Future Atlantis missions include STS-120, STS-124 and STS-125, which is designated the last Hubble servicing mission.

Brewer earned a Bachelor of Science degree in electrical engineering from Southern Illinois University. She is married to Dan Brewer and has a daughter, Kacie, and son, Rusty. In her spare time she attends her children's basketball and soccer games. She also likes to watch sports, play poker and read.