The archaeologist for the squadron, Penders is one of about only 20 professional archaeologists in the burgeoning field of aerospace archaeology. The responsibilities of the cultural resource manager encompass all the historic launch complexes, cemeteries, and launch-related buildings on Patrick Air Force Base, Cape Canaveral Air Force Station, and their related areas, such as the Malabar Training Annex. 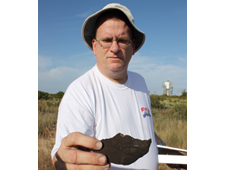 He shares information with Kennedy Space Center's Historic Preservation Officer Barbara Naylor. Penders also is the facility manager of the Cape Canaveral Lighthouse and has oversight of all World War II facilities and Cold War buildings at Patrick.

An aerospace archaeologist's pursuit is to find, document, recover and preserve sites important in aerospace history. Although primarily missile crash sites, structures and facilities used in the space program also are included.

One such site that Penders has been studying on Cape Canaveral is a crater left by a Jupiter missile accident more than 50 years ago. Almost all the fragments identified are from the lower and middle interior areas of the missile. 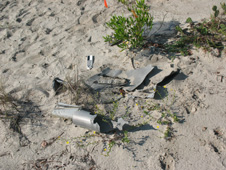 Named after the heaps of earth and artifacts that were left by ancient dwellers, Little Midden is a 7,500-square-foot patch of soil one-and-a-half-feet deep. Unfortunately, the site was partially destroyed during the 1960s when the area was used to process meteorological rockets. Remnants of their infrastructure are still visible among the undergrowth.

"It appears that the rocket processing facility destroyed part of the site," Penders said. "Some of the midden material was removed and used to stabilize some unpaved roads nearby. We are left with a small snapshot of what was once a significantly larger site."

With much of the history already lost, the goal now is to extract as much remaining information as possible by painstakingly filtering shovelfuls of dirt, shells and roots to recover the 500 to 1,000-year-old shards of pottery, stone tools, and even shark's teeth and vertebrae.

"There are numerous middens at Cape Canaveral, but not many with the number of atypical artifacts as we are seeing here from our excavations to date," Penders said. "The animal bones suggest the site may have been used for a temporary seasonal camp, but the artifacts suggest there may have been a more permanent settlement here at one time."

All artifacts discovered at the Little Midden site will be kept at Cape Canaveral. Once the current excavation is finished, a report will be sent to the Florida State Historic Preservation Office. The Air Force then will be allowed to develop the property if needed. 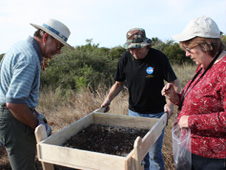 Image above: From left, Dale Hawkins, Timothy Kozusko and Elaine Williams sift through dirt and stones for artifacts at the Little Midden archeological site at Cape Canaveral earlier this year. Photo courtesy of U.S. Air Force

Another rather unique site under evaluation is the Sarah site, named for the woman who identified it in 2008 during the annual scrub jay census. Sarah had attended a presentation Penders made at the Space Coast Birding Festival.

Located near the north boundary of Cape Canaveral Air Force Station, the Sarah site is a large site that has not been impacted by development or previous investigations. At first, the site was thought to be a relatively small scatter of prehistoric artifacts, but recent analysis suggests the site could be one-mile long. This midden site promises to be an important site and identifying its significance and boundaries is under way.

The artifacts found so far include check-stamped pottery, an indication that the site dates to the Malabar II Period, from AD 750 to 1565, as well as animal bones, shell tools, and a ship's spike that may date to a time of early European contact. A small percussion cap from a black powder rifle also found is direct evidence of the mid-19th century homestead known to have existed there.

"We have a lot more testing to do before we can make any final assumptions about the site," Penders said.

In the meantime, Penders is working on a paper on the Jupiter missile site, which he will be presenting at a conference of the Society for Historical Archaeology in January.

For more information on the Indian River Anthropological Society and its projects, visit:
http://www.nbbd.com/npr/archaeology-iras/