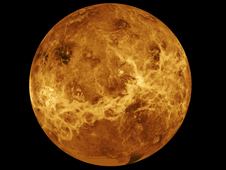 Name: Kevin McGouldrick
Affiliation: University of Colorado, Boulder
Proposal Title: Combined theoretical and observational multi-disciplinary analysis
of the structure and evolution of the clouds and hazes of Venus

Akatsuki was launched on May 21, 2010 (Japan Standard Time, JST) and is Japan's first mission to Venus. The spacecraft will arrive at Venus on Dec. 7, 2010, and will follow the Venus westward rotation of the atmosphere, mapping the circulation, evolution and vertical structure of the planet's thick clouds.

The three-dimensional structure of the Venusian atmosphere and its temporal variation will be observed by using the Akatsuki spacecraft's imaging cameras (from the ultraviolet to thermal infrared wavelengths), a high-speed lightning detector and radio occultation techniques that will penetrate the thick Venusian atmosphere. Akatsuki's systematic and continuous observations from a quasi-equatorial orbit will provide a complete dataset of atmospheric dynamics.

Mitsubishi Heavy Industries, Ltd. and JAXA launched Akasutki aboard H-IIA Launch Vehicle No. 17 (H-IIA F17) at 6:58:22 a.m. on May 21, 2010 (JST) from the Tanegashima Space Center. The mission lifespan in Venus orbit is approximately two Earth years.

For information about NASA and agency programs, visit: http://www.nasa.gov .

More information about JAXA's Venus Climate Orbiter is at: http://www.jaxa.jp/projects/sat/planet_c/index_e.html .