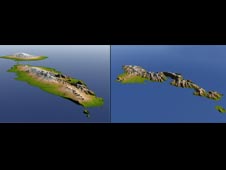 Digital topographic data such as those produced by SRTM can be used to aid researchers and planners in predicting which coastal regions are at the most risk from such waves, as well as from the more common storm surges caused by tropical storms and even sea level rise.