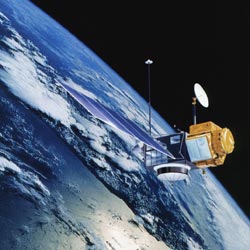 "Topex/Poseidon revolutionized the study of Earth's oceans, providing the first continuous, global coverage of ocean surface topography and allowing us to see important week-to-week oceanic variations," said Dr. Mary Cleave, associate administrator for NASA's Science Mission Directorate. "Its data made a huge difference in our understanding of the oceans and their effect on global climatic conditions."

"Topex/Poseidon was built to fly up to five years, but it became history's longest Earth-orbiting radar mission," said Topex/Poseidon Project Scientist Dr. Lee-Lueng Fu of NASA's Jet Propulsion Laboratory, Pasadena, Calif. "It provided, on average, more than 98 percent of the science data it was designed to collect in every 10-day measurement cycle, a remarkable achievement."

The satellite's pitch reaction wheel, which helps keep the spacecraft in its proper orbital orientation, stalled on October 9, and ground controllers concluded the wheel was not functioning. The satellite remains in orbit 1,336 kilometers (830 miles) above the Earth, posing no threat to the planet.

"Topex/Poseidon was a unique mission that attracted users around the world, including more than 600 scientists in 54 countries," said Dr. Yves Menard, Topex/Poseidon project scientist at Centre National d'Etudes Spatiales in Toulouse, France.

Topex/Poseidon's data have been the subject of more than 2,100 research publications; major science and application achievements include:

Beyond Jason, the Ocean Surface Topography Mission is in development for a scheduled launch in 2008. It will continue providing high-precision sea surface height data to the oceanographic science community.

The joint effort had its genesis in 1979, when NASA began developing the Topex mission, while the Centre National d'Etudes Spatiales was planning a similar one called Poseidon. The agencies formed a single mission in 1983, and it was launched August 10, 1992. JPL manages the U.S. portion of Topex/Poseidon/Jason for NASA's Science Mission Directorate. Centre National d'Etudes Spatiales manages the French portion of both missions.

For information about both missions on the Web, visit: http://sealevel.jpl.nasa.gov and http://www.aviso.oceanobs.com .