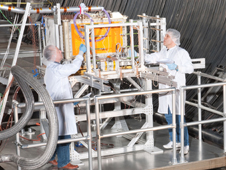 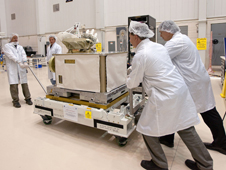 The SCaN Testbed will provide an orbiting laboratory on the Space Station for the development of Software Defined Radio technology. Researchers will have the capability to load new software onto these devices even after they've launched. Future space missions will be able to return more scientific information by changing the radio's behavior, allowing for communication with later missions that might use different signals or data formats.

The testbed will be the first space hardware to provide an experimental laboratory to demonstrate many new capabilities, including communications, networking and navigation techniques that utilize Software Defined Radio technology. The SCaN Testbed includes three such radio devices, each with different capabilities. Two Software Defined Radios were developed under cooperative agreements with General Dynamics, West Falls Church, Va., and Harris Corp., Melbourne, Fla., and the third was developed by NASA's Jet Propulsion Laboratory Pasadena, Calif. JPL also provided the five-antenna system on the exterior of the testbed, which will be used to communicate with NASA's orbiting communications relay satellites and NASA ground stations across the United States.

These systems will allow researchers to conduct a suite of experiments over the next five years, enabling the advancement of a new generation of space communications.

"Public researchers such as students and professors or industry will have the opportunity to write software to test on the devices, which makes this testbed unique," said Jim Lux, a JPL scientist and SCaN Testbed co-principal investigator. "The NASA/JPL radio has been developed using open source software, and most of the documentation is available to the public."

The SCaN Testbed will launch to the International Space Station on Japanese Aerospace Exploration Agency's H-IIB Transfer Vehicle and be installed by extravehicular robotics to the ExPRESS Logistics Carrier-3 on the exterior truss of the Space Station.

The SCaN Testbed will join other NASA network components to help build capabilities for a new generation of space communications for human exploration.