Young Thinkers Get to Tinker at JPL 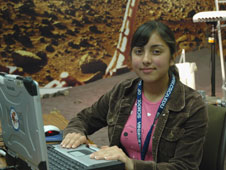 Whenever someone needs a hand in advanced robotics, they ask for Yuri Carrillo. She can do just about anything, from finding and replacing bad wires to integrating new circuit boards on scientific instruments.

But Carrillo is not a regular JPL employee. An 18-year-old sophomore studying electrical engineering at Cal Poly San Luis Obispo, Carrillo is one of more than 300 students who have swelled the Lab's ranks this summer, hailing from high schools, community colleges, four-year universities and graduate schools across the country. The students are getting a front-seat, hands-on, real-world taste of the professional science and engineering world. 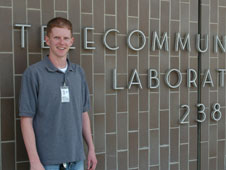 Maneuvering a satellite into orbit - and keeping it there - requires extremely precise knowledge of its location. Since satellites and spacecraft use the Global Positioning System to determine where they are, scientists and engineers must be sure the GPS satellites are transmitting their own positions accurately.

At JPL, Jones works with some of the engineers who track the GPS satellites. His job is to take reams of raw data and write a program that will organize it neatly into charts, graphs, tables, maps and diagrams. It's a boon for bleary-eyed scientists, who can then quickly find and digest relevant information. But it helps Jones too, since he gets to learn the JPL recipe for resolving satellite positions and he also gets to work with Python, a programming language common in the industry.

"Part of me would love to stay in academia and become a professor," Jones says. "But there's also that part of me that doesn't like submitting proposals all the time and searching for the money actively. I'd rather be able to focus on the work." Jones says that working at JPL is a good combination of industry and academia. 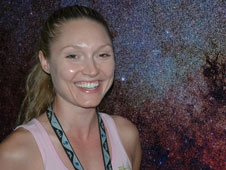 Erin Edkins is entering her senior year at UC Santa Barbara. Image credit: NASA/JPL
› Browse version of image
Erin Edkins has followed a more circuitous path to science. The 28-year-old personal fitness trainer and former restaurant manager says she finally went back to school after years of "working like a dog." This is her second summer at JPL.

"I've always been a turbo nerd, so you come in, you're like, 'Yes! I'm at JPL! That's awesome!'" says Edkins, who is entering her senior year at UC Santa Barbara.

Edkins works with planetary atmosphere scientists who followed the convergence of Jupiter's Great Red Spot and a nearby Little Red Spot this summer. They have been studying the flow of gases inside these titanic storms and observing changes in internal temperatures to learn more about how the storms formed and how they evolve over time. This summer, the group got to follow the birth and life of a new storm, dubbed by some the Baby Red Spot, before it got sandwiched between the other two and disappeared altogether.

Edkins works on what engineers and scientists call data reduction and analysis with incoming Jupiter images. After filtering out noise from cosmic rays, bad pixels and Earth's atmosphere, she creates two kinds of images - those used for data analysis, and those released externally on JPL's Web sites.

Edkins says she loves being one of the first people to see the incoming pictures, a perk that comes with the territory. She encourages other students to consider a JPL internship.

"Go for it," she says. "Definitely the worst thing that could happen is you could contact someone to work with at JPL and they say no. Then you're in the same position you started in."

If Edkins got a late start, then Yuri Carrillo beat everyone off the line. She was still in high school when she first came to JPL, and now she's a regular jill-of-all-trades.

Carrillo tackles any sort of engineering - mechanical, electrical, software. For a drill that collects samples for geological analysis, she helped make coils used to magnetically swap the drill bits. And she modified commercial batteries to fit a special three-unit hill-climbing rover.

Carrillo says she really enjoys working at JPL because she gets to work on "a lot of cool stuff," and she hopes one day to become a full-time employee.

"Before I came I thought it was going to be very serious and uptight, and then I realized it's more like a college campus," she says.

It may be that collegial atmosphere or the "cool stuff" that continually appeals to students, but as long as they keep coming, summers at the lab will be exciting - and busy.

Students wishing to work at JPL have a number of options. Between its Education Office and the Human Resources Directorate, JPL offers 20 different programs to students, recent graduates, and faculty. To learn more, visit http://studentprograms.jpl.nasa.gov/external/index_ext.cfm.
› Back To Top