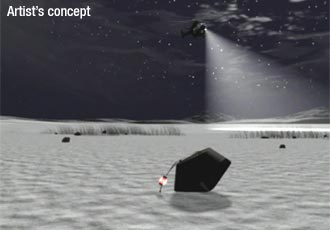 "Ten years of planning and seven years of flight operations were realized early this morning when we successfully picked up our return capsule off of the desert floor in Utah," said Tom Duxbury, Stardust project manager at NASA's Jet Propulsion Laboratory, Pasadena, Calif. "The Stardust project has delivered to the international science community material that has been unaltered since the formation of our solar system."

"I have been waiting for this day since the early 1980s when Deputy Principal Investigator Dr. Peter Tsou of JPL and I designed a mission to collect comet dust," said Dr. Don Brownlee, Stardust principal investigator from the University of Washington, Seattle. "To see the capsule safely back on its home planet is a thrilling accomplishment."

The sample return capsule's science canister and its cargo of comet and interstellar dust particles will be stowed inside a special aluminum carrying case to await transfer to the Johnson Space Center, Houston, where it will be opened. NASA's Stardust mission traveled 2.88 billion miles during its seven-year round-trip odyssey. Scientists believe these precious samples will help provide answers to fundamental questions about comets and the origins of the solar system.