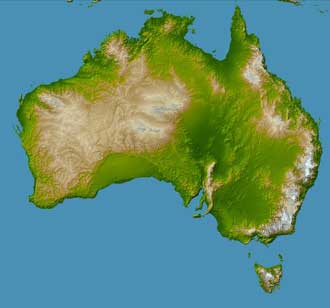 Image right: Australia is the world's smallest, flattest, and (after Antarctica) driest continent, but at 7.7 million square kilometers (3.0 million square miles) it is also the sixth largest country. Its low average elevation (300 meters, or less than 1000 feet) is caused by its position near the center of a tectonic plate, where there are no volcanic or other geologic forces of the type that raise the topography of other continents. Image credit: NASA/JPL.

The data, extensive enough to fill the U.S. Library of Congress, were gathered during the Shuttle Radar Topography Mission, which flew in February 2000 on the Space Shuttle Endeavour.

The digital elevation maps encompass 80 percent of Earth's landmass. They reveal for the first time large, detailed swaths of Earth's topography previously obscured by persistent cloudiness. The data will benefit scientists, engineers, government agencies and the public with an ever-growing array of uses.

"This is among the most significant science missions the Shuttle has ever performed, and it's probably the most significant mapping mission of any single type ever," said Dr. Michael Kobrick, mission project scientist at NASA's Jet Propulsion Laboratory, Pasadena, Calif.

The final data release covers Australia and New Zealand in unprecedented uniform detail. It also covers more than 1,000 islands comprising much of Polynesia and Melanesia in the South Pacific, as well as islands in the South Indian and Atlantic oceans.

"Many of these islands have never had their topography mapped," Kobrick said. "Their low topography makes them vulnerable to tidal effects, storm surges and long-term sea level rise. Knowing exactly where rising waters will go is vital to mitigating the effects of future disasters such as the Indian Ocean tsunami."

Data from the Shuttle Radar Topography Mission are being used for applications ranging from land use planning to "virtual" Earth exploration. "Future missions using similar technology could monitor changes in Earth's topography over time, and even map the topography of other planets," said Dr. John LaBrecque, manager of NASA's Solid Earth and Natural Hazards Program, NASA Headquarters, Washington, D.C.

The mission's radar system mapped Earth from 56 degrees south to 60 degrees north of the equator. The resolution of the publicly available data is three arc-seconds (1/1,200th of a degree of latitude and longitude, about 295 feet, at Earth's equator). The mission is a collaboration among NASA, the National Geospatial- Intelligence Agency, and the German and Italian space agencies. The mission's role in space history was honored with a display of the mission's canister and mast antenna at the Smithsonian Institution's Udvar-Hazy Center, Chantilly, Va.

To view a selection of new images from the Shuttle Radar Topography Mission's latest data set on the Internet, visit http://photojournal.jpl.nasa.gov/mission/SRTM.

To view a new fly-over animation of New Zealand on the Internet, visit http://www2.jpl.nasa.gov/srtm/.

For information about NASA and agency programs, visit: http://www.nasa.gov.