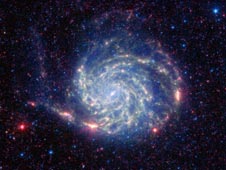 The Pinwheel galaxy is gussied up in infrared light in a new picture from NASA's Spitzer Space Telescope.

The fluffy-looking galaxy, officially named Messier 101, is dominated by a mishmash of spiral arms. In Spitzer's new view, in which infrared light is color coded, the galaxy sports a swirling blue center and a unique, coral-red outer ring.

A new paper appearing July 20 in the Astrophysical Journal explains why this outer ring stands out. According to the authors, the red color highlights a zone where organic molecules called polycyclic aromatic hydrocarbons, which are present throughout most of the galaxy, suddenly disappear.

Polycyclic aromatic hydrocarbons are dusty, carbon-containing molecules found in star nurseries, and on Earth in barbeque pits, exhaust pipes and anywhere combustion reactions take place. Scientists believe this space dust has the potential to be converted into the stuff of life.

"If you were going look for life in Messier 101, you would not want to look at its edges," said Karl Gordon of the Space Telescope Science Institute in Baltimore, Md. "The organics can't survive in these regions, most likely because of high amounts of harsh radiation." To view Spitzer's Pinwheel, visit http://www.nasa.gov/mission_pages/spitzer/multimedia/20080721a.html

The Pinwheel galaxy is located about 27 million light-years away in the constellation Ursa Major. It has one of the highest known gradients of metals (elements heavier than helium) of all nearby galaxies in our universe. In other words, its concentrations of metals are highest at its center, and decline rapidly with distance from the center. This is because stars, which produce metals, are squeezed more tightly into the galaxy's central quarters.

Gordon and his team used Spitzer to learn about the galaxy's gradient of polycyclic aromatic hydrocarbons. The astronomers found that, like the metals, the polycyclic aromatic hydrocarbons decrease in concentration toward the outer portion of the galaxy. But, unlike the metals, these organic molecules quickly drop off and are no longer detected at the very outer rim.

"There's a threshold at the rim of this galaxy, where the organic material is getting destroyed," said Gordon.

The findings also provide a better understanding of the conditions under which the very first stars and galaxies arose. In the early universe, there were not a lot of metals or polycyclic aromatic hydrocarbons around. The outskirt of the Pinwheel galaxy therefore serves as a close-up example of what the environment might look like in a distant galaxy.

In this image, infrared light with a wavelength of 3.6 microns is colored blue; 8-micron light is green; and 24-micron light is red. All three of Spitzer instruments were used in the study: the infrared array camera, the multiband imaging photometer and the infrared spectrograph.