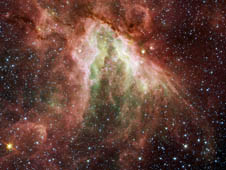 A new image from NASA's Spitzer Space Telescope shows a turbulent star-forming region, where rivers of gas and stellar winds are eroding thickets of dusty material.

The picture provides some of the best examples yet of the ripples of gas, or bow shocks, that can form around stars in choppy cosmic waters.

"The stars are like rocks in a rushing river," said Matt Povich of the University of Wisconsin, Madison. "Powerful winds from the most massive stars at the center of the cloud produce a large flow of expanding gas. This gas then piles up with dust in front of winds from other massive stars that are pushing back against the flow." Povich is lead author of a paper describing the new findings in the Dec. 10 issue of the Astrophysical Journal.

Spitzer's new infrared view of the stormy region, called M17, or the Swan nebula, is online at http://www.nasa.gov/mission_pages/spitzer/multimedia/20081208.html . The Swan is located about 6,000 light-years away in the constellation Sagittarius. 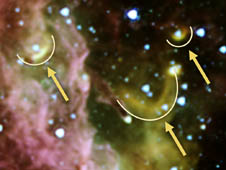 Spitzer found ripples of gas, or bow shocks, around massive stars in the stormy Swan nebula. Image credit: NASA/JPL-Caltech/Univ. of Wisc.
Full image and caption
› Browse version of image
Dominating the center of the Swan is a group of massive stars, some exceeding 40 times the mass of our sun. These central stars are 100,000 to one million times as bright as the sun, and roar with radiation and fierce winds made of charged particles that speed along at up to 7.2 kilometers per hour (4.5 million miles per hour). Both the wind and radiation carve out a deep cavity at the center of the picture -- an ongoing process thought to trigger the birth of new stars.

The growth of this cavity pushes gas up against winds from other massive stars, causing "smiley-faced" bow shocks -- three of which can be seen in the new picture. The direction of the bow shocks tells researchers exactly which way the "wind is blowing."

"The bow shocks are like interstellar weather vanes, indicating the direction of the stellar winds in the nebula," said Povich.

Povich and his colleagues also used Spitzer to take an infrared picture of a star-forming region called RCW 49. Both photographs are described in the same Astrophysical Journal paper, and both provide the first examples of multiple bow shocks around the massive stars of star-forming regions.

Spitzer was able to spot the bow shocks because its infrared eyes can pierce intervening dust, and because it can photograph large swaths of sky quickly.

Ultimately, the new observations will help researchers understand how solar systems like our own are able to form and persist in the rough, celestial seas of space.

"The gas being lit up in these star-forming regions looks very wispy and fragile, but looks can be deceiving," said co-author Robert Benjamin of the University of Wisconsin, Whitewater. "These bow shocks serve as a reminder that stars aren't born in quiet nurseries but in violent regions buffeted by winds more powerful than anything we see on Earth."