Satellites and Sea Lions: Working Together to Improve Ocean Models
The best oceanographers in the world never studied at a university. Yet they know how to navigate expertly along oceanic fronts, the invisible boundaries between waters of different temperatures and densities. These ocean experts can find rich fishing in places and at depths that others would assume are barren. They regularly visit the most interesting and dynamic parts of the sea. 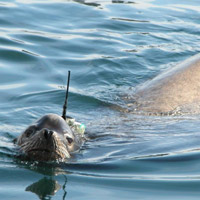 Sea lions, seals, sharks, tuna and other top ocean predators share some of their experiences with human researchers, thanks to electronic tags. Besides tracking the animals, these sensors also collect oceanographic data, such as temperature and salinity. Scientists are beginning to incorporate this rich store of information into ocean models providing new insights into the inner workings of the ocean and the lives of its creatures.

"Our goal is to produce a three-dimensional model of the ocean," says JPL oceanographer Dr. Yi Chao. Chao uses data from satellites, ships, buoys and floats to map the currents, heat content and different water densities beneath the ocean surface. When Chao heard Dr. Dan Costa, a professor of marine biology at the University of California, Santa Cruz, present some of his animal tagging data at a scientific meeting a few years ago, he saw an opportunity to improve his ocean models. Costa recognized a chance to get a clearer picture of the place where his research subjects live.

Chao and Costa started their collaboration with sea lions. Costa studies how marine mammals adapt to the ocean environment. As part of this research, he and his post doc Mike Weise tag and track California sea lions off the coast of Santa Cruz. Chao and his colleagues at JPL used the independent temperature data collected by the sea lions to see how well their ocean model could predict the temperature at specific depths. Then they worked on ways of assimilating the sea lion data with more conventional oceanographic data to create more accurate and detailed ocean models. "Satellites provide a two-dimensional view of the ocean," says Chao. "Animals give us a slice of the ocean. They're like weather balloons in reverse." 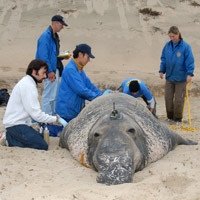 Image left: The field team attaches a tag to the fur of a sedated male elephant seal. Special permits are required for this work to ensure the animal's protection. Image credit: Daniel Costa
+ Browse version of image

The research collaboration now includes Dr. Barbara Block, a professor of marine sciences at Stanford University, Palo Alto, Calif., and the scientists have added tagging data collected from tuna and sharks to their studies. Together with a group called TOPP, for Tagging of Pacific Pelagics, they are now working to expand the use of environmental and biological data collected by ocean inhabitants.

"We are at the forefront of knowing how animals use the ocean," says Costa. "But we want to understand the environment better. We still see the ocean primarily as deep or shallow or near-shore or offshore. But just as there are different habitats on land, the ocean has fine-scale features that are very important to animals," he explains. "We want to be able to look at the ocean and say the equivalent of "this is a grassland" or "this is a forest."

In late January, Costa and his research group headed up the California coast to begin tagging elephant seals and collecting tags that were deployed last spring. The work is strictly regulated to ensure that the animals are protected from harm, and it requires a permit from the National Marine Fisheries Service.

"We're constantly learning new things about these animals that are amazing," Costa says. One of his students recently tagged a 17-year old female elephant seal and discovered that the animal had been tagged before, when she was 6. "She went to the same place that she did 11 years ago," says Costa. "What clues is she using to be able to follow the same track? Better ocean models can tell us what's out there, what currents she faced and what the habitats are like." 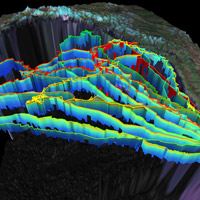 "Marine scientists have been tracking marine animals for years," says Chao. "It's an interesting challenge, though, to use the data. There are all sorts-- from tuna, sharks, seals--you name it. Some of these data sets have small errors, others much larger errors. Figuring out how to put these in our system is a challenge, "he says. "But five years from now, we should be able to see the ocean the way a turtle sees it."

"As we are getting more data from the sea and improving our computer models," says Chao, "we should be able to make routine ocean forecasts, similar to what meteorologists have been doing in the past few decades. People who open the newspaper or turn on the TV in the morning will see the updated ocean forecast and make appropriate decisions as they plan their activities on the sea."

What is most important about using marine animals as ocean sensors is that the work benefits the animals, Costa explains. "Collaborations between biologists like Barbara Block and me and physical oceanographers like Yi are critical for understanding why the animals go where they go," he says, "as we need to know and understand the ocean physics and its relationship to climate processes. Further, the ability to understand how climate change is affecting the world oceans is not only of benefit to humans, but is vital for trying figure out what is going to happen to habitat of marine animals."