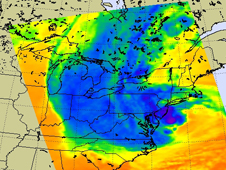 NASA's Atmospheric Infrared Sounder (AIRS) instrument on NASA's Aqua spacecraft captured this infrared image of Hurricane Sandy, another weather front to the west and cold air coming down from Canada at 2:17 p.m. EDT Oct. 29. The hurricane center is the darkest purple area in the Atlantic just to the east of the New Jersey coast, reflecting Sandy's areas of heaviest rainfall. Image Credit: NASA/JPL-Caltech/
› Larger image
› Browse version of image
Hurricane Sandy is expected to affect as many as 60 million Americans this week as it combines with other weather fronts to create an anticipated 'superstorm.' Satellites and instruments from NASA's Jet Propulsion Laboratory, Pasadena, Calif., are busy monitoring the storm. New information from the satellites will be added to this page as it becomes available. NASA's Atmospheric Infrared Sounder Tracks Sandy's Approach

NASA's Atmospheric Infrared Sounder (AIRS) instrument on NASA's Aqua spacecraft captured this infrared image of Hurricane Sandy at 2:17 p.m. EDT on Oct. 29, 2012. The center of the storm, denoted by the darkest purple area in the Atlantic just to the east of New Jersey, was located approximately 260 miles (418 kilometers) south-southeast of New York City, moving to the north-northwest at 18 mph (16 knots). The storm's coldest cloud-top temperatures are indicated by the brightest shades of purple, and show where Sandy's heaviest rainfall is occurring. Sandy is merging with a storm front from the west and cold air from Canada to form a 'superstorm' that is expected to affect a broad area of the eastern U.S. for days.

A 3-D side profile image and associated animation of Hurricane Sandy showing the storm's vertical structure were created from data obtained by NASA's CloudSat satellite as it flew over Hurricane Sandy at 2:32 p.m. EDT on Oct. 27, 2012. At the time, Sandy was located about 336 miles (540 kilometers) southeast of Charleston, S.C., and was a minimal Category 1 hurricane at the time, with maximum sustained winds of 75 mph (65 knots). Sandy was moving slowly to the northeast at 11 mph (10 knots), almost parallel to the southeast United States coast, and was directly crossing the warm waters of the Gulf Stream. The colors in the CloudSat image indicate the strength of the CloudSat radar's returned signal, termed the reflectivity. Red and purple areas indicate the greatest amounts of cloud water or precipitation.

CloudSat flew over the storm just to the west of its inner core, traveling from points A to B on the CloudSat image and the larger black-and-white reference image from NASA's Moderate Resolution Imaging Spectroradiometer (MODIS) instrument on NASA's Aqua spacecraft. At the time, light to moderate precipitation associated with parts of Sandy's outer bands was moving onshore into parts of North Carolina, where CloudSat intersected the system. Heavier showers and thunderstorms were located farther south and east of the Atlantic coastline over the open water, where the estimated ocean temperature is approximately 81 degrees Fahrenheit (27 degrees Celsius). CloudSat's signal tends to weaken in these areas of heavier convection when raindrops become larger than 0.12 inches (3 millimeters) in diameter. The cloud shield associated with Hurricane Sandy extended well over 620 miles (1,000 kilometers) from the storm's center, covering parts of eastern Kentucky, Tennessee, Virginia and West Virginia with mid- and high-level cloudiness (cirrus and altocumulus clouds).

The animation begins by depicting global cloud motion for the 72 hours prior to CloudSat's observation of Sandy, from NOAA's Geostationary Operational Environmental Satellites. It then zooms in to reveal the vertical cross-section of Sandy from CloudSat. The storm's most intense convection and precipitation are depicted in shades of oranges, reds and purples.

For more detailed technical information on Sandy, please visit JPL's Hurricane and Severe Storm Sentinel (HS3) portal at: http://hs3.jpl.nasa.gov/HS3/index.jsp. A Google Earth plugin is required to view the website. The website, created for scientists supporting this year's NASA HS3 field campaign, is a collaboration with other institutions. It integrates data from satellites, models and direct measurements from many sources to help researchers quickly locate information about current and recent oceanic and atmospheric conditions. The composite images and data are updated every hour and are displayed using a Google Earth plug-in. With a few mouse clicks, users can manipulate data sets to provide insights on storms that aren't possible by looking at single data sets alone. The data can be animated and downloaded on demand.Alan Buis 818-354-0474
Jet Propulsion Laboratory, Pasadena, Calif.
Alan.buis@jpl.nasa.gov