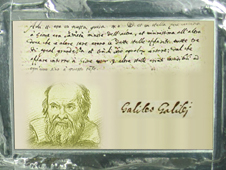 Among his many achievements, Galileo Galilei discovered that moons orbited Jupiter in 1610. These satellites -- Io, Europa, Ganymede and Callisto -- are also known as the Galilean moons.

An image of the plaque is online at: http://www.nasa.gov/mission_pages/juno/multimedia/galileo20110803.html .

The plaque, which was provided by the Italian Space Agency, measures 2.8 by 2 inches (71 by 51 millimeters), is made of flight-grade aluminum and weighs six grams (0.2 ounces). It was bonded to Juno's propulsion bay with a spacecraft-grade epoxy. The graphic on the plaque depicts a self-portrait of Galileo. It also includes -- in Galileo's own hand -- a passage he made in 1610 of observations of Jupiter, archived in the Biblioteca Nazionale Centrale in Florence.

Galileo's text included on the plaque reads as follows: "On the 11th it was in this formation -- and the star closest to Jupiter was half the size than the other and very close to the other so that during the previous nights all of the three observed stars looked of the same dimension and among them equally afar; so that it is evident that around Jupiter there are three moving stars invisible till this time to everyone."

Juno is scheduled to launch aboard a United Launch Alliance Atlas V rocket from Cape Canaveral, Fla. The solar-powered spacecraft will orbit Jupiter's poles 33 times to find out more about the gas giant's origins, structure, atmosphere and magnetosphere and investigate the existence of a solid planetary core.

NASA's Jet Propulsion Laboratory, Pasadena, Calif., manages the Juno mission for the principal investigator, Scott Bolton, of Southwest Research Institute in San Antonio. The Italian Space Agency in Rome is contributing an infrared spectrometer instrument and a portion of the radio science experiment. The Juno mission is part of the New Frontiers Program managed at NASA's Marshall Space Flight Center in Huntsville, Ala. Lockheed Martin Space Systems, Denver, built the spacecraft. Launch management for the mission is the responsibility of NASA's Launch Services Program at the Kennedy Space Center in Florida. JPL is a division of the California Institute of Technology in Pasadena.

More information about Juno is online at http://www.nasa.gov/juno and http://missionjuno.swri.edu . You can follow the mission on Twitter at http://www.twitter.com/nasajuno .DC Agle 818-393-9011
Jet Propulsion Laboratory, Pasadena, Calif.
agle@jpl.nasa.gov