Short-Term Ocean Cooling Suggests Global Warming 'Speed Bump'
Update as of 5/30/07: Recent analyses have revealed that results from some of the ocean float and shipboard sensor data used in this study were incorrect. As a result, the study's conclusion that the oceans cooled between 2003 and 2005 can not be substantiated at this time. The study authors are currently working to correct these data errors and recompute ocean temperature changes.

The average temperature of the water near the top of Earth's oceans has significantly cooled since 2003. New research suggests global warming trends are not always steady in their effects on ocean temperatures.

Although the average temperature of the upper oceans has significantly cooled since 2003, the decline is a fraction of the total ocean warming over the previous 48 years. 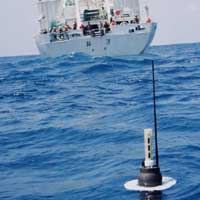 "This research suggests global warming isn't always steady, but happens with occasional 'speed bumps'," said Dr. Josh Willis, a co-author of the study at NASA's Jet Propulsion Laboratory, Pasadena, Calif. "This cooling is probably natural climate variability. The oceans today are still warmer than they were during the 1980s, and most scientists expect the oceans will eventually continue to warm in response to human-induced climate change."

Willis said the findings have significant implications for global sea-level rise. "Average sea level goes up partly due to warming and thermal expansion of the oceans and partly due to runoff from melting glaciers and ice sheets," Willis said. "The recent cooling episode suggests sea level should have actually decreased in the past two years. Despite this, sea level has continued to rise. This may mean that sea level rise has recently shifted from being mostly caused by warming to being dominated by melting. This idea is consistent with recent estimates of ice-mass loss in Antarctica and accelerating ice-mass loss on Greenland."

For the study, Dr. John Lyman at the National Oceanic and Atmospheric Administration (NOAA) Pacific Marine Environmental Laboratory, Seattle, and his co-authors estimated the heat content of the upper 750 meters (approximately 2,500 feet) of Earth's oceans from 1993 to 2005. This area represents about 20 percent of the global ocean's average depth.

Researchers found the average temperature of the upper ocean increased by 0.09 degrees Celcius (0.16 degrees Fahrenheit) from 1993 to 2003, and then fell 0.03 degrees Celcius (0.055 degrees Fahrenheit) from 2003 to 2005. The recent decrease is a dip equal to about one-fifth of the heat gained by the ocean between 1955 and 2003. They analyzed data from a broad array of ocean moorings, floats and shipboard sensors, and supported their results with data from NASA's Jason and Topex/Poseidon satellites.

Lyman said the recent cooling is not unprecedented. "While global ocean temperatures have generally increased over the past 50 years, there have also been substantial decadal decreases." "Other studies have shown that a similar rapid cooling took place from 1980 to 1983. But overall, the long-term trend is warming."

Monitoring the heat content of the oceans is vital to understanding how Earth's energy balance is changing. "The capacity of Earth's oceans to store the sun's energy is more than 1,000 times that of Earth's atmosphere," Lyman said. "It's important to measure upper ocean temperature, since 84 percent of the heat absorbed by Earth since the mid-1950s has gone toward warming the ocean. Measuring ocean temperature is really measuring the progress of global warming."

Lyman said the cause of the recent cooling is not yet clear. Research suggests it may be due to a net loss of heat from the Earth. "Further work will be necessary to solve this cooling mystery," he said.

Another implication of the study is greater uncertainty in estimates of long-term ocean warming rates. "Understanding decadal rises and dips in Earth's ocean temperature is important in predicting Earth's climate," Lyman said. "Hopefully, the results of our study will help refine the ability of computer models to make these predictions."

The study included researchers from NASA, NOAA, and the Joint Institute for Marine and Atmospheric Research of the University of Hawaii, Manoa. Results are published in the journal Geophysical Research Letters. For more information about NASA and agency programs, visit: http://www.nasa.gov/home