JPL Helps Shoot for the Moon, Stars, Planets and More

A giant telescope, galaxy maps, and laser beacons on Mars are only a few of the ideas that teams selected by NASA will study for the next generation of astronomy and astrophysics missions. NASA's Jet Propulsion Laboratory, Pasadena, Calif., will help usher in this new era by playing an active role in 15 of the 19 science teams chosen to look at new concepts for future missions. 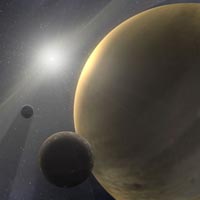 
The 15 teams will explore concepts for missions to hunt for planets orbiting other stars (exoplanets) and to answer various astrophysics questions. JPL will manage six exoplanet and five astrophysics mission concepts and contribute to another four astrophysics mission plans managed from other NASA centers by aiding engineering and mission design, refining the science goals and supporting cost estimates.

The final reports will be put up for review in front of the Decadal Survey Committee, which sets the priorities for astronomy and astrophysics studies every 10 years, said Michael Werner, the chief scientist for astronomy and physics at JPL.

With half a dozen exoplanet mission concepts in the mix, it's clear the hunt for smaller, Earthlike planets that might harbor life is very much on the minds of NASA and the public.

"The idea has been discussed by thinkers going back to the ancient Greeks, Renaissance thinkers, and all the way up to modern times," said Michael Devirian, manager of the Exoplanet Exploration Program at JPL, which encompasses NASA's planet-finding efforts. "One can imagine primitive man sitting around the campfire, wondering what's outside the circle of light, just as we now conduct our search, outside the circle of light of our sun. The search for other planets touches all of us deep in our psyche, and it's very easy to relate to and imagine what could be out there."

Planet mania is catching the fancy of the younger generation, according to Jakob Van Zyl, who heads JPL's Astronomy and Physics Directorate. "Anytime there's an exoplanet session at a science conference, you have a lot of young people showing up and interested."

Devirian said NASA plans to issue an announcement of opportunity in 2009 for a moderate-scale exoplanet mission.

"The concepts that we are working on are candidates for this mission," Devirian said. "NASA will wait and see what the Decadal Survey Committee has to say before selecting a mission."

The various exoplanet mission concepts span all the techniques currently being developed to detect planets, according to Devirian. Several will attempt to zoom in and image giant planets that orbit around some of our neighboring stars. These studies will use different types of coronagraphs, mask-like instruments that attach to telescopes to block the harsh, blinding starlight that hides the dimmer planets. By using coronagraphs, scientists can find the comparatively miniscule light from planets orbiting close to these stars. One of these proposed missions combines a coronagraph on the telescope with an external occulter, a starlight blocker flying separately thousands of kilometers away, in order to look very close to a star for planets in orbits similar to the orbit of Earth around our star, the sun.

One of the mission concepts will test a nulling interferometer to cancel a star's light with the goal of imaging giant planets, and, by seeing light from the ring of dust that marks a planet's orbit, learn about the architectures of planetary systems. The other mission concept will study a large stellar interferometer--6 meters, or 20 feet long--that could be used to find planets by measuring the star's "wiggle," or its reciprocal motion with the planets around it.

"The science of exoplanets is one of the most vibrant and exciting areas to study at this time," Devirian said. "It is also one of the most challenging, so it's very important to conduct these studies to come up with the best approaches for these missions."

Meanwhile, Elsewhere in the Universe.......

Van Zyl notes that astrophysics includes other research areas that are also grabbing their share of attention. "Astrophysics is a broad field of study, and that fact is manifested in the wide range of topics these teams are investigating."

The nine astrophysics mission concept studies will range from testing general relativity to mapping the early universe's rapid expansion. JPL will manage five of these studies. One of these will perform a systematic study of all astrophysical processes relevant to the births and deaths of stars in both our galaxy and in nearby galaxies. Another will study the polarization of the cosmic microwave background, the radiation left over when our universe was formed. A third will measure the shape of the cosmic inflation potential by conducting a near-infrared large-area redshift survey capable of detecting galaxies that formed early in the history of the universe.

Another astrophysics study will explore placing laser beacons on Mars and measuring the precise distance to perform the most precise test ever of Einstein's theory of general relativity. Last but not least, two moon-related studies include a "Dark Ages" lunar interferometer to map out hydrogen gas clouds formed during the early days of the universe.

JPL will also contribute to astrophysics mission concept studies managed by other NASA centers, including a study of a giant telescope (eight to 16 meters in diameter, or 26 to 52 feet), and an investigation of the organic molecules floating in the spaces between stars, a means of looking at the origin of cosmic rays.

Werner said he was pleased that NASA was able to sponsor these studies as a way to prepare for the Decadal Survey Committee. "The success of these missions will reflect the strength of JPL's astrophysics activities," Werner said.

The Who's Who of New Missions!

The 15 selected science teams and their mission concept studies are: