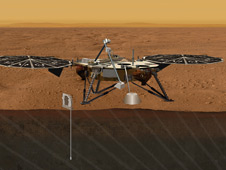 An artist's concept portrays the proposed Geophysical Monitoring Station mission for studying the deep interior of Mars. Image Credit: NASA/JPL-Caltech
 Full image and caption
› Browse version of image
PASADENA, Calif. -- NASA has selected three science investigations from which it will pick one potential 2016 mission to look at Mars' interior for the first time; study an extraterrestrial sea on one of Saturn's moons; or study in unprecedented detail the surface of a comet's nucleus. NASA's Jet Propulsion Laboratory, Pasadena, Calif., would lead the Mars investigation.

Each investigation team will receive $3 million to conduct its mission's concept phase or preliminary design studies and analyses. After another detailed review in 2012 of the concept studies, NASA will select one to continue development efforts leading up to launch. The selected mission will be cost-capped at $425 million, not including launch vehicle funding.

NASA's Discovery Program requested proposals for spaceflight investigations in June 2010. A panel of NASA and other scientists and engineers reviewed 28 submissions. The selected investigations could reveal much about the formation of our solar system and its dynamic processes. Three technology developments for possible future planetary missions also were selected.

"NASA continues to do extraordinary science that is re-writing textbooks," said NASA Administrator Charles Bolden. "Missions like these hold great promise to vastly increase our knowledge, extend our reach into the solar system and inspire future generations of explorers."

The planetary missions selected to pursue preliminary design studies are:

-- Geophysical Monitoring Station (GEMS) would study the structure and composition of the interior of Mars and advance understanding of the formation and evolution of terrestrial planets. Bruce Banerdt of NASA's Jet Propulsion Laboratory in Pasadena, Calif., is principal investigator. JPL would manage the project.

The proposed Mars lander would carry three experiments. A seismometer for measuring Mars quakes would yield knowledge about interior materials from the crust to the core. A thermal probe beneath the surface would monitor heat flow from the planet's interior. Radio capability for Doppler tracking of tiny variations in the planet's wobble would provide information about the size and nature of the core. Understanding more about the deep interior of another planet would enable important new comparisons with what is known about Earth's interior.
"We want to know more about how the pieces that formed planets came together in the first place, and about the changes that took place afterwards," Banerdt said. "This would be a mission to understand the formation and evolution of terrestrial planets."

-- Titan Mare Explorer (TiME) would provide the first direct exploration of an ocean environment beyond Earth by landing in, and floating on, a large methane-ethane sea on Saturn's moon Titan. Ellen Stofan of Proxemy Research Inc. in Gaithersburg, Md., is principal investigator. Johns Hopkins University's Applied Physics Laboratory in Laurel, Md., would manage the project.

-- Comet Hopper would study cometary evolution by landing on a comet multiple times and observing its changes as it interacts with the sun. Jessica Sunshine of the University of Maryland in College Park is principal investigator. NASA's Goddard Space Flight Center in Greenbelt, Md., would manage the project.

"This is high science return at a price that's right," said Jim Green, director of NASA's Planetary Science Division in Washington. "The selected studies clearly demonstrate a new era with missions that all touch their targets to perform unique and exciting science."

The three selected technology development proposals will expand the ability to catalog near-Earth objects, or NEOs; enhance the capability to determine the composition of comet ices; and validate a new method to reveal the population of objects in the poorly understood, far-distant part of our solar system. During the next several years, selected teams will receive funding that is determined through contract negotiations to bring their respective technologies to a higher level of readiness. To be considered for flight, teams must demonstrate progress in a future mission proposal competition.

The proposals selected for technology development are:

-- NEOCam would develop a telescope to study the origin and evolution of near-Earth Objects and study the present risk of Earth-impact. It would generate a catalog of objects and accurate infrared measurements to provide a better understanding of small bodies that cross our planet's orbit. Amy Mainzer of JPL is principal investigator.

A space-based telescope, NEOCam would be positioned in a location about four times the distance between Earth and the moon. From this lofty perch, NEOCam could observe the comings and goings of NEOs every day without the impediments to efficient observing like cloud cover and even daylight. The location in space NEOCam would inhabit is also important, because it allows the monitoring of areas of the sky generally inaccessible to ground-based surveys.

"Near-Earth objects are some of the most bountiful, intriguing and least understood of Earth's neighbors," said Amy Mainzer. "With NEOCam, we would get to know these solar system nomads in greater detail."

-- Primitive Material Explorer (PriME) would develop a mass spectrometer that would provide highly precise measurements of the chemical composition of a comet and explore the objects' role in delivering volatiles to Earth. Anita Cochran of the University of Texas in Austin is principal investigator.

-- Whipple: Reaching into the Outer Solar System would develop and validate a technique called blind occultation that could lead to the discovery of various celestial objects in the outer solar system and revolutionize our understanding of the area's structure. Charles Alcock of the Smithsonian Astrophysical Observatory in Cambridge, Mass., is principal investigator.