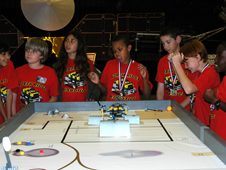 Students from "The ThunderBots" from Northridge Magnet School in Moreno Valley show off their first place Lego robot after the competition. Image credit: NASA/JPL-Caltech
 Larger image
› Browse version of image
Near a testing chamber at NASA's Jet Propulsion Laboratory, where a team of technicians are preparing and testing NASA's next Mars rover, students from across Southern California gathered to compete in a robotics challenge that simulated planetary exploration using table-top sized robots made out of Lego pieces.

The school teams spent months creating small Lego robots programmed with special software for this contest, which included placing sensors in "volcanoes," deploying habitats and rescuing a stranded "moon buggy." The robotic competition aims to engage students in math, science, technology and engineering. Each team had four students. The contest was divided into two sections: one for elementary-school teams, and the other for middle- and high-school teams.

In between the competition rounds and the awards ceremony, JPL robotics engineer Paulo Younse gave the students a special presentation on robotics at JPL featuring a video on Mars Science Laboratory, which features the rover named Curiosity, and how it works.

The Lego Robotics competition was streamed live on the Web. A video of the event can be viewed at http://livestre.am/F8jU .

For more information about the next mission to Mars, visit http://mars.jpl.nasa.gov/msl/ .

More information about robotics programs for students can be found online at http://www.usfirst.org/roboticsprograms/fll/default.aspx .