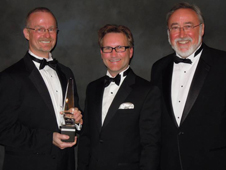 "With nearly 1,000 scientists throughout the world actively engaged in investigating the bounty of Kepler data, the team is honored to marshal in a new age of planetary discovery," said William Borucki, Kepler principal investigator at Ames. "We are delighted by the results and of the promise of Kepler's most profound discoveries that await."

Aviation Week's annual Laureate Awards recognize individuals and teams for their extraordinary accomplishments. Their achievements embody the spirit of exploration, innovation, vision or any combination of these attributes that inspire others to strive for significant, broad-reaching progress in aviation and aerospace.

Kepler is a space observatory trailing Earth around the sun, currently at a distance of more than 30 million miles (48 million kilometers). Kepler's task is to measure the change in brightness of more than 150,000 stars looking for the telltale signature of a planet passing, or transiting, in front of its host star. Three transits are required to verify a signal as a planet.

Ball Aerospace & Technologies Corp. in Boulder, Colo., developed the Kepler flight system and supports mission operations with the Laboratory for Atmospheric and Space Physics at the University of Colorado in Boulder.

More information about Kepler is online at http://www.nasa.gov/kepler and http://www.kepler.nasa.gov .