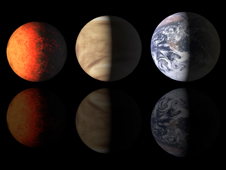 This chart compares the first Earth-size planets found around a sun-like star to planets in our own solar system, Earth and Venus. Image credit: NASA/Ames/JPL-Caltech
› Larger image
› Browse version of image 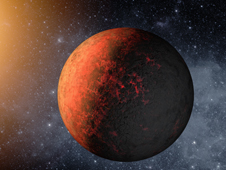 Kepler-20e is the first planet smaller than the Earth discovered to orbit a star other than the sun. Image credit: NASA/Ames/JPL-Caltech
› Larger image
› Browse version of image 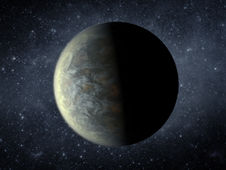 Kepler-20f is the closest object to the Earth in terms of size ever discovered. With an orbital period of 20 days and a surface temperature of 800 degrees Fahrenheit (430 degrees Celsius), it is too hot to host life, as we know it. Image credit: NASA/Ames/JPL-Caltech
› Larger image
› Browse version of image
PASADENA, Calif. -- NASA's Kepler mission has discovered the first Earth-size planets orbiting a sun-like star outside our solar system. The planets, called Kepler-20e and Kepler-20f, are too close to their star to be in the so-called habitable zone where liquid water could exist on a planet's surface, but they are the smallest exoplanets ever confirmed around a star like our sun.

The discovery marks the next important milestone in the ultimate search for planets like Earth. The new planets are thought to be rocky. Kepler-20e is slightly smaller than Venus, measuring 0.87 times the radius of Earth. Kepler-20f is slightly larger than Earth, measuring 1.03 times its radius. Both planets reside in a five-planet system called Kepler-20, approximately 1,000 light-years away in the constellation Lyra.

"The primary goal of the Kepler mission is to find Earth-sized planets in the habitable zone," said Francois Fressin of the Harvard-Smithsonian Center for Astrophysics in Cambridge, Mass., lead author of a new study published in the journal Nature. "This discovery demonstrates for the first time that Earth-size planets exist around other stars, and that we are able to detect them."

The Kepler-20 system includes three other planets that are larger than Earth but smaller than Neptune. Kepler-20b, the closest planet, Kepler-20c, the third planet, and Kepler-20d, the fifth planet, orbit their star every 3.7, 10.9 and 77.6 days, respectively. All five planets have orbits lying roughly within Mercury's orbit in our solar system. The host star belongs to the same G-type class as our sun, although it is slightly smaller and cooler.

The system has an unexpected arrangement. In our solar system, small, rocky worlds orbit close to the sun and large, gaseous worlds orbit farther out. In comparison, the planets of Kepler-20 are organized in alternating size: large, small, large, small and large.

"The Kepler data are showing us some planetary systems have arrangements of planets very different from that seen in our solar system," said Jack Lissauer, planetary scientist and Kepler science team member at NASA's Ames Research Center in Moffett Field, Calif. "The analysis of Kepler data continues to reveal new insights about the diversity of planets and planetary systems within our galaxy."

Scientists are not certain how the system evolved, but they do not think the planets formed in their existing locations. They theorize the planets formed farther from their star and then migrated inward, likely through interactions with the disk of material from which they originated. This allowed the worlds to maintain their regular spacing despite alternating sizes.

The Kepler space telescope detects planets and planet candidates by measuring dips in the brightness of more than 150,000 stars to search for planets crossing in front of, or transiting, their stars. The Kepler science team requires at least three transits to verify a signal as a planet.

The Kepler science team uses ground-based telescopes and the Spitzer Space Telescope to review observations on planet candidates the Kepler spacecraft finds. The star field Kepler observes in the constellations Cygnus and Lyra can be seen only from ground-based observatories in spring through early fall. The data from these other observations help determine which candidates can be validated as planets.

To validate Kepler-20e and Kepler-20f, astronomers used a computer program called Blender, which runs simulations to help rule out other astrophysical phenomena masquerading as a planet.

On Dec. 5, the team announced the discovery of Kepler-22b in the habitable zone of its parent star. It is likely to be too large to have a rocky surface. While Kepler-20e and Kepler-20f are Earth-size, they are too close to their parent star to have liquid water on the surface.

"In the cosmic game of hide and seek, finding planets with just the right size and just the right temperature seems only a matter of time," said Natalie Batalha, Kepler deputy science team lead and professor of astronomy and physics at San Jose State University. "We are on the edge of our seats knowing that Kepler's most anticipated discoveries are still to come."