NASA/French Satellite Data Reveal New Details of Tsunami
For the first time, orbiting satellites have observed and measured a major tsunami event in open ocean, the Indian Ocean tsunami that resulted from the magnitude 9 earthquake southwest of Sumatra on December 26. The measurements are of tremendous value to researchers worldwide and will aid our understanding of these events. 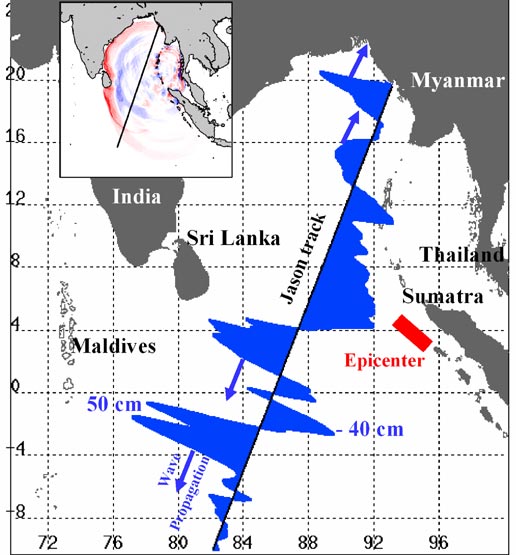 Image above: The NASA/French Space Agency Jason satellite measured the changes in sea surface height (displayed in blue) caused by the initial series of waves of the Indian Ocean tsunami over the open ocean two hours after the initial magnitude 9 earthquake hit the region (shown in red) southeast of Sumatra December 26, 2004. The maximum height of the leading wave crest was about 50 centimeters (1.6 feet). The blue arrows indicate the direction the waves traveled. The inset image from the National Institute of Advanced Industrial Science and Technology, Japan, shows computer-simulated changes of sea surface height caused by the earthquake at the same time. Wave crests are shown in red and troughs in blue. The track traversed by the Jason satellite is also shown. Image credit: NASA/JPL/CNES/National Institute of Advanced Industrial Science and Technology, Japan. + Click for larger image

U.S. and French teams working in parallel with altimetry data from the joint NASA/French Space Agency Jason and Topex/Poseidon oceanography satellites have independently confirmed the satellites' measurements of the height of the tsunami waves as they radiated from the earthquake's epicenter. The satellites flew over the Bay of Bengal about 150 kilometers (93 miles) apart approximately two hours after the quake.

"These two satellites make only about 13 Earth revolutions daily, with each orbit passing over the Earth approximately 3,000 kilometers (1,864 miles) away from its last," said Dr. Philip Callahan of NASA's Jet Propulsion Laboratory, Pasadena, Calif. Callahan has been searching for tsunami signals in satellite radar altimeter data since Topex/Poseidon's launch in 1992. "There is a very low probability of capturing observations in any given location within two hours of an event like this. The fact that Jason captured the tsunami's signals is serendipitous, but is nevertheless a major boon for oceanographers," he said.

"The observations made by Jason and Topex/Poseidon are unique and of tremendous value for testing and improving tsunami computer models and developing future tsunami early warning systems," said JPL's Dr. Lee-Lueng Fu, Jason and Topex/Poseidon project scientist. "The satellite altimeter data currently take a minimum of five hours to process, so they cannot provide early warning of such events," said Fu. Dr. Callahan received the Jason data the morning of December 27.

The new images are available online at: http://photojournal.jpl.nasa.gov/catalog/PIA07219

The main figure displays changes in sea surface height from previous observations made along the same ground track 20 to 30 days before the earthquake, showing the signals of the tsunami waves. The inset is a computer model of simulated changes in sea surface height created by Kenji Satake of the National Institute of Advanced Industrial Science and Technology, Japan. It provides a basin-wide perspective for interpreting the Jason and Topex/Poseidon satellite observations, which are in good agreement with the model.

The satellites recorded a maximum sea surface elevation gain (deviation from normal) of 50 centimeters (1.6 feet) on the open ocean about 1,200 kilometers (746 miles) south of Sri Lanka at the leading crest of a tsunami wave raging out of the Bay of Bengal. It was followed by a trough of sea surface depression of 40 centimeters (1.3 feet) below normal. The distance from one wave crest to the next was about 800 kilometers (500 miles). The first wave was followed by a second with a crest height of 40 centimeters (1.3 feet) above normal. Near the northern end of the Bay, two waves with crest heights of 40 centimeters (1.3 feet) and 20 centimeters (0.66 feet) above normal were approaching the coasts of Myanmar. Spreading across the Bay of Bengal from the earthquake zone offshore from Western Sumatra, these tsunami waves eventually reached shallow waters along the coasts of Sumatra, Sri Lanka, Thailand and Southern India. Their open ocean speeds reduced from that of a jet plane, 800 kilometers (500 miles) per hour, to about 32 kilometers (20 miles) per hour, building the open ocean wave heights of 0.5 meters (1.6 feet) or less to walls of water up to 10 meters (33 feet) high with great destructive power.

Jason and Topex/Poseidon are collaborative satellite missions of NASA and the French Space Agency, Centre National d'Estudes Spatiales. The primary objectives of the two missions are to make long-term measurements of the height of the world's sea surface to better understand ocean circulation and its effects on climate.

"The information on sea surface height from these satellites has many other applications, and can be used to aid navigation, offshore operations, hurricane forecasting, fisheries, etcetera," said Dr. Yves Menard, Jason and Topex/Poseidon project scientist at the Centre National d'Estudes Spatiales. "The detection of these tsunami waves provides yet another demonstration of the important value of satellite radar altimeter observations."

NASA and the French Space Agency are working with the National Oceanic and Atmospheric Administration and the European Organization for the Exploitation of Meteorological Satellites to develop the next radar altimeter mission, the Ocean Surface Topography Mission, targeted for launch in 2008. It will make radar altimeter measurement a routine operation of those organizations in the future.