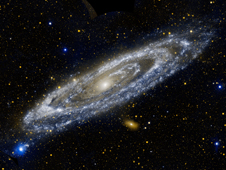 At approximately 2.5 million light-years away, the Andromeda galaxy is our Milky Way's largest galactic neighbor. The entire galaxy spans 260,000 light-years across -- a distance so large, it took 11 different Galaxy Evolution Explorer image segments stitched together to produce this view of the galaxy next door. Image credit: NASA/JPL-Caltech
› Full image and caption
› Browse version of image 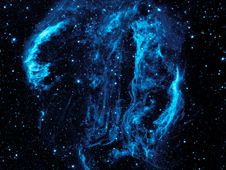 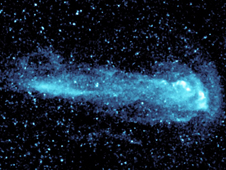 A speeding star can be seen leaving an enormous trail in this image from NASA's Galaxy Evolution Explorer. Image Credit: NASA/JPL-Caltech
› Full image and caption
› Browse version of image
WASHINGTON -- NASA is lending the Galaxy Evolution Explorer (GALEX) to the California Institute of Technology (Caltech) in Pasadena, where the spacecraft will continue its exploration of the cosmos. In a first-of-a-kind move for NASA, a Space Act Agreement was signed May 14 so the university soon can resume spacecraft operations and data management for the mission using private funds.

"NASA sees this as an opportunity to allow the public to continue reaping the benefits from this space asset that NASA developed using federal funding," said Paul Hertz, NASA's Astrophysics Division director at the agency's headquarters in Washington. "This is an excellent example of a public/private partnership that will help further astronomy in the United States."

The Galaxy Evolution Explorer spent about nine years as a NASA mission, probing the sky with its sharp ultraviolet eyes and cataloguing hundreds of millions of galaxies spanning 10 billion years of cosmic time.

"This mission was full of surprises, and now more surprises are sure to come," said Chris Martin, who will remain the mission's principal investigator at Caltech. "It already has scanned a large fraction of the sky, improving our understanding of how galaxies grow and evolve. The astronomy community will continue those studies, in addition to spending more time on stars closer to home in our own galaxy."

The spacecraft was placed in standby mode on Feb. 7 of this year. Soon, Caltech will begin to manage and operate the satellite, working with several international research groups to continue ultraviolet studies of the universe. Projects include cataloguing more galaxies across the entire sky; watching how stars and galaxies change over time; and making deep observations of the stars being surveyed for orbiting planets by NASA's Kepler mission. Data will continue to be made available to the public.

"We're thrilled that the mission will continue on its path of discovery," said Kerry Erickson, the mission's project manager at NASA's Jet Propulsion Laboratory in Pasadena, Calif. "The Galaxy Evolution Explorer is like the 'little engine that could,' forging ahead into unexplored territory."

During its time at NASA, the Galaxy Evolution Explorer made many discoveries involving various types of objects that light up our sky with ultraviolet light. Perhaps the most surprising of these was the discovery of a gargantuan comet-like tail behind a speeding star called Mira. Other finds included catching black holes "red-handed" as they munch away on stars, spying giant rings of new stars around old, presumed dead galaxies, and independently confirming the nature of dark energy.

For astronomers, the most profound shift in their understanding of galaxy evolution came from the mission's findings about a "missing link" population of galaxies. These missing members helped explain how the two major types of galaxies in our universe -- the "red and dead" ellipticals and the blue spirals -- transition from one type to another.

"We were able to trace the life of a galaxy," Martin said. "With the Galaxy Evolution Explorer's ultraviolet detectors, we were able to isolate the small amounts of star formation that are the signatures of galaxies undergoing an evolutionary change. We found that galaxies don't have a single personality, but may change types many times over their lifetime."

The mission also captured a dazzling collection of snapshots, showing everything from ghostly nebulas to a spiral galaxy with huge, spidery arms. A slideshow showing some of the top images can be seen here: http://www.nasa.gov/mission_pages/galex/gallery-index.html .

Under the new agreement, NASA maintains ownership and liability for the Galaxy Evolution Explorer spacecraft. When Caltech completes science activities, it will decommission the spacecraft for NASA. The mission's batteries and solar panels have an expected lifetime of 12 years or more, and the spacecraft will remain in orbit for at least 66 years, after which it will burn-up upon re-entry into Earth's atmosphere. The agreement can be renegotiated when it expires in three years.

Orbital Sciences Corporation in Dulles, Va., which built the spacecraft, will continue performing flight control functions for Caltech associated with monitoring and commanding GALEX and participating in mission planning. Universal Space Network will continue providing the ground stations for communicating with the spacecraft.