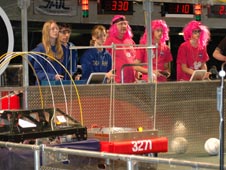 The JPL-mentored winning team "Beach Bots" from Hermosa Beach, Calif., is shown here in blue next to the "The Pink Team" from the area around Cocoa Beach, Florida. The teams are operating their robots remotely. Image credit: NASA/JPL
› Larger view
› Browse version of image


Fifty-eight teams from Southern California, Florida, Massachusetts and Chile competed in the Los Angeles regional FIRST (For Inspiration and Recognition of Science and Technology) Robotics competition this past weekend, March 27 and 28. NASA's Jet Propulsion Laboratory, Pasadena, Calif., mentored 10 of the schools in this annual engineering and technology contest, which was held at the Long Beach Convention Center.

This year's "Breakaway" challenge closely resembled a robotic soccer match. In each two-minute-15-second match, two alliances of three teams competed on a 27-by-54-foot field with bumps. The object of the game was to attain the highest score by shooting balls into a goal, climbing on the alliance tower or platform, or by lifting an alliance robot off the playing surface.

The students designed and built their robots with the help of engineers from JPL, aerospace and other companies and institutions of higher education.

These students are among the more than 38,000 students in 1,500 teams from around the world vying to compete in the FIRST championships. FIRST is part of NASA's Robotics Alliance Project, which aims to expand the number of robotics systems experts available to NASA.