Hotly-Debated Solar System Object Gets a Name
A new name has been bestowed on the "dwarf planet" whose discovery in 2005 rocked the solar system, sparked debate over "What is a planet?" and ultimately led to Pluto's removal from the planetary family. The dwarf planet, formerly known as 2003 UB313, is now called Eris, after the Greek goddess of discord and strife. 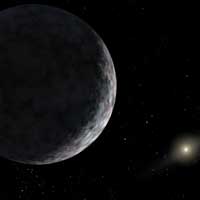 Those two words accurately sum up the controversy in the astronomical community over the past year about whether the newly found object should be called a planet, since it's larger than Pluto. The discovery revived long-simmering questions about whether Pluto itself, with its small size, distant location and odd orbit, is actually a planet or just an icy remnant of the planet-forming process.

The International Astronomical Union resolved that issue last month at its meeting in Prague, Czech Republic, by shrinking the solar system from nine to eight planets, and putting Pluto, Eris and the largest known asteroid, Ceres, into a new category called dwarf planets. The decision has not completely ended the controversy. Some astronomers question the scientific validity of the arrangement, and many non-scientists bemoan the loss of a familiar planet and wax nostalgic for familiar tools to help kids memorize the planets. After all, they argue, "My very excellent mother just served us nine" doesn't have quite the same ring to it as adding the word "pizzas."

The Astronomical Union, founded in 1919, assigns names to celestial bodies. After the organization's ruling on the status of 2003 UB313, co-discoverers Dr. Michael Brown of the California Institute of Technoloy, Dr. Chad Trujillo of the Gemini Observatory, and Dr. David Rabinowitz of Yale University proposed the name Eris. The Astronomical Union accepted it. In addition, Eris's moon will be called Dysnomia, the demon goddess of lawlessness and the daughter of Eris.

After the International Astronomical Union ruling on the definition of a planet, Dr. Paul Hertz, chief scientist for the Science Mission Directorate at NASA Headquarters, said, "NASA will, of course, use the new guidelines established by the International Astronomical Union. We will continue pursuing exploration of the most scientifically interesting objects in the solar system, regardless of how they are categorized."