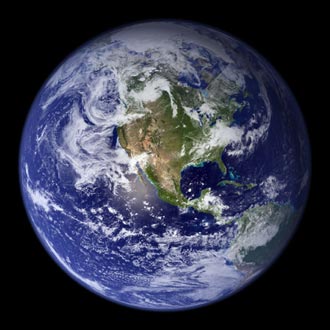 Image right: Most of the information in this view of Earth was taken by NASA's Moderate Resolution Imaging Spectroradiometer. The instrument is aboard the Terra satellite. Image credit: NASA/Goddard Space Flight Center.

"Any worldly event that involves the movement of mass affects the Earth's rotation, from seasonal weather down to driving a car," Chao said.

Gross and Chao have been routinely calculating earthquakes' effects in changing the Earth's rotation in both length-of-day as well as changes in Earth's gravitational field. They also study changes in polar motion that is shifting the North Pole. The "mean North pole" was shifted by about 2.5 centimeters (1 inch) in the direction of 145 degrees East Longitude. This shift east is continuing a long-term seismic trend identified in previous studies.

They also found the earthquake decreased the length of day by 2.68 microseconds. Physically this is like a spinning skater drawing arms closer to the body resulting in a faster spin. The quake also affected the Earth's shape. They found Earth's oblateness (flattening on the top and bulging at the equator) decreased by a small amount. It decreased about one part in 10 billion, continuing the trend of earthquakes making Earth less oblate.

To make a comparison about the mass that was shifted as a result of the earthquake, and how it affected the Earth, Chao compares it to the great Three-Gorge reservoir of China. If filled, the gorge would hold 40 cubic kilometers (10 trillion gallons) of water. That shift of mass would increase the length of day by only 0.06 microseconds and make the Earth only very slightly more round in the middle and flat on the top. It would shift the pole position by about two centimeters (0.8 inch).

The researchers concluded the Sumatra earthquake caused a length of day change too small to detect, but it can be calculated. It also caused an oblateness change barely detectable, and a pole shift large enough to be possibly identified. They hope to detect the length of day signal and pole shift when Earth rotation data from ground based and space-borne position sensors are reviewed.

The researchers used data from the Harvard University Centroid Moment Tensor database that catalogs large earthquakes. The data is calculated in a set of formulas, and the results are reported and updated on a NASA Web site.

The massive earthquake off the west coast of Indonesia on December 26, 2004, registered a magnitude of nine on the new "moment" scale (modified Richter scale) that indicates the size of earthquakes. It was the fourth largest earthquake in one hundred years and largest since the 1964 Prince William Sound, Alaska earthquake.

The devastating mega thrust earthquake occurred as a result of the India and Burma plates coming together. It was caused by the release of stresses that developed as the India plate slid beneath the overriding Burma plate. The fault dislocation, or earthquake, consisted of a downward sliding of one plate relative to the overlying plate. The net effect was a slightly more compact Earth. The India plate began its descent into the mantle at the Sunda trench that lies west of the earthquake's epicenter. For information and images on the Web, visit:

For details on the Sumatra, Indonesia Earthquake, visit the USGS Internet site:

For information about NASA and agency programs Web, visit: