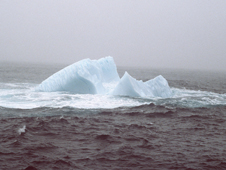 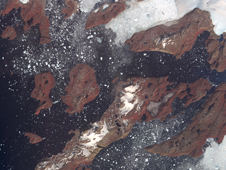 The west coast of Greenland is one of Earth's premiere incubators for icebergs, large blocks of land ice that break off from glaciers or ice shelves and float in the ocean, where they are transported by winds and currents and can pose potential threats to shipping. Image credit: NASA/GSFC/METI/ERSDAC/JAROS, and U.S./Japan ASTER Science Team
› Full image and caption
› Browse version of image
Icebergs are a natural and beautiful part of Earth's cryosphere, and are closely monitored and studied by scientists around the world.

We asked JPL research scientists Ben Holt and Michael Schodlok to attempt to remove some of the mystery shrouding these floating flotillas of ice.

Q. What are icebergs and how are they formed?

A. Ben Holt: Icebergs form from the natural calving of glaciers and Earth's great ice sheets, which extend into the ocean. These ice extensions, called tongues and shelves, lose strength as they extend further from their attachments to land, eventually breaking off in a process called 'calving' to form icebergs.

Q. How do icebergs move?

A. Ben Holt: Once they form, icebergs are moved by winds and currents, drifting either north or south toward Earth's equator, where they eventually melt. They may get stuck locally by the ocean bottom or even by surrounding sea ice.

Q. Where do icebergs form, and how big can they get?

A. Ben Holt: Earth's largest icebergs are formed from the extensive ice shelves in Antarctica-giant, so-called "tabular" icebergs. In the Arctic region, Greenland glaciers are the primary source, generally forming considerably smaller icebergs than those found in Antarctica. These smaller icebergs, sometimes called "bergy bits" and "growlers," are much more difficult to detect than the extensive tabular icebergs, and thus pose a much greater threat to ships and offshore operations. Greenland icebergs get carried southward along the Labrador Current, which passes around Newfoundland and into the Grand Banks area of southeastern Canada and New England, which is where the Titanic met its demise when it rammed into an iceberg of sufficient size and force to puncture its hull.

Q. How are icebergs tracked and monitored?

A. Ben Holt: Shortly after the Titanic accident, a joint service, called the International Ice Patrol, was started between the United States and Canada to monitor icebergs entering the Grand Banks region. This collaborative effort uses ships, aircraft and satellites to identify icebergs in the area and provide charts for fisheries, ship traffic and offshore operators to help predict icebergs passing south of 48 degrees North latitude. According to the International Ice Patrol's 2011 Annual Report, the IIP uses two traditional measurements to determine the severity of each ice season. First, they measure the number of icebergs first sighted or detected south of 48 degrees North latitude, which includes icebergs first sighted or detected further north that drift south. Second, they measure the length of the season, which is measured in the number of days that icebergs--either modeled or sighted--were present south of 48 degrees North latitude. Last year, IIP reported that only three icebergs, not including the small "bergy bits" or "growlers," were modeled to have drifted south of 48 degrees North latitude, and none were actually sighted or detected remotely. These modeled icebergs were only present for 25 days in May. This marked the fifth time since 1983, when the IIP began routinely using aircraft equipped with radars to detect icebergs, that icebergs didn't reach the Grand Banks.

Michael Schodlok: In the Antarctic, icebergs that are larger than 11 by 11 nautical miles in length and width (about 12 by 12 miles, or 20 by 20 kilometers) are detected and tracked by satellites, including NASA's QuikScat mission. A listing of current large Antarctic icebergs and their positions is online at: http://www.scp.byu.edu/current_icebergs.html . Small- to medium-sized icebergs, which make up the major part of the iceberg size distribution, can only be  tracked with buoys. In the Weddell Sea, we visited icebergs by helicopter and dug a GPS buoy into the firn layer (a layer of partially compacted granular snow that has survived one summer melt season but has not yet become glacial ice). Depending on how stable the iceberg is, the buoy batteries should allow the iceberg's location to be transmitted for up to three years. By knowing the iceberg's daily positions, we were able to establish the main drift pattern of this size of iceberg in the Weddell Sea. However, iceberg decay and hence the overturning of the iceberg shorten the buoy's lifetime.

Q. How can satellites monitor and study icebergs?

A. Ben Holt: From satellites, icebergs can be detected and tracked over time using several types of sensors. Finer-resolution optical sensors and imaging radar are needed to identify smaller icebergs, such as those typically found off the coast of Canada, while coarser-resolution sensors, including radar scatterometers such as NASA's QuikScat that nominally measure wind speed, are used to detect larger tabular icebergs. Larger icebergs within sea ice often produce open water wakes behind them, similar to the wakes ships leave behind, improving their detection.Alan Buis 818-354-0474
Jet Propulsion Laboratory, Pasadena, Calif.
alan.buis@jpl.nasa.gov