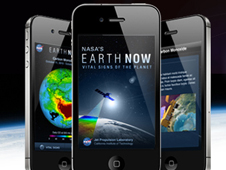 Available at the iTunes Store or by visiting http://www.jpl.nasa.gov/apps , Earth Now displays data on many of the key vital signs of our planet that NASA satellites track. Whether your interest is current surface air temperatures over Australia, carbon dioxide or carbon monoxide levels over Canada, ozone over Oman, water vapor over Wales, gravity anomalies in Greenland or sea level height anomalies at St. Petersburg, Earth Now brings a world of ever-changing climate data to your fingertips.

The regularly updated data are displayed as color maps projected over a 3D Earth model that can be rotated by a single finger stroke, or zoomed in and out by the pinch or spread of two fingers. Color-coded legends indicate the relative strength or weakness of environmental conditions. Helpful descriptions provide background information on each data set.

"Earth Now is a great resource for students, teachers and anyone interested in Earth's changing climate," said Michael Greene, manager for public engagement formulation and strategic alliances at NASA's Jet Propulsion Laboratory, Pasadena, Calif. "Since its debut last month, it's already been downloaded nearly 170,000 times. Plans are in place for development of an Android version and for the addition of new NASA Earth science data sets over time."

Earth Now is closely integrated with NASA's Webby Award-winning Global Climate Change website, http://climate.nasa.gov , which is devoted to educating the public about Earth's changing climate, providing easy-to-understand information about the causes and effects of climate change and how NASA studies it. The app was developed by the Earth Science Communications, Visualization Technology Applications and Development Teams at JPL, with support from NASA Headquarters.

JPL is a division of the California Institute of Technology in Pasadena.Alan Buis 818-354-0474
Jet Propulsion Laboratory, Pasadena, Calif.
Alan.D.Buis@jpl.nasa.gov