Only Five More Days for Your Name to Rise With the Dawn
NASA's campaign to send the nom de plumes of people from around the world into the heart of the asteroid belt ends Sat., Nov. 4.

Submitted names will be carried on board NASA's Dawn, the first spacecraft to travel between and scrutinize two distinct worlds. Mission scientists are confident Dawn observations of asteroid Vesta and dwarf planet Ceres will answer basic questions about the nature and composition of these celestial wanderers. 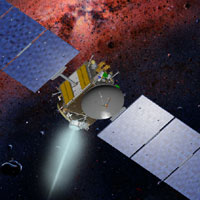 "How many chances do you get to fly into the very heart of the asteroid belt?" said Keyur Patel, Dawn project manager at NASA's Jet Propulsion Laboratory, Pasadena, Calif. "When the craft is launched in June 2007, yours and the names of your loved ones can hitch along for the ride and be part of space exploration history."

Dawn will carry a silicon chip containing the names of asteroid, space and other enthusiasts from around the world. People may submit their names for this historic one-way mission by visiting JPL's Dawn Web site now through Nov. 4 at http://dawn.jpl.nasa.gov . More than 170,000 people have already signed up for the asteroid belt tour.

Following launch, Dawn will employ an ion engine to propel it during its more than four year, 3-billion-kilometer journey (1.9-billion miles) to its first target -- asteroid Vesta. After months of detailed scientific observation of Vesta, Dawn's ion engine will fire up again, and send it on its way for a 2014 rendezvous with Ceres, recently anointed a "dwarf planet" by the International Astronomical Union.

"This campaign will allow people from around the world to become directly involved with Dawn, and through that, become familiar with the mission's science," said University of California Los Angeles professor Dr. Chris Russell, Dawn's principal investigator.

The Dawn mission is managed by JPL, a division of the California Institute of Technology in Pasadena, for NASA's Science Mission Directorate, Washington. The University of California Los Angeles is responsible for overall Dawn mission science. Orbital Sciences Corporation of Dulles, Virginia, designed and built the Dawn spacecraft. For information about NASA and other space flight missions on the Internet, visit http://www.nasa.gov .