A Perspective on Life on Enceladus 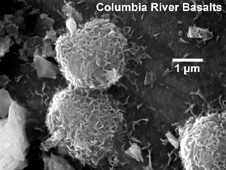 Methanogens belong to an ancient group related to bacteria, called the archaea -- thrive without oxygen. Deep volcanic rocks along the Columbia River and in Idaho Falls host two of these ecosystems.
? Browse version of image

Could microbial life exist inside Enceladus, where no sunlight reaches, photosynthesis is impossible and no oxygen is available? To answer that question, we need look no farther than our own planet to find examples of the types of exotic ecosystems that could make life possible on Saturn's geyser moon. The answer appears to be, yes, it could be possible. It is this tantalizing potential that brings us back to Enceladus for further study.

In recent years, life forms have been found on Earth that thrive in places where the sun doesn't shine and oxygen is not present because no photosynthesis takes place. Microbes have been discovered that survive on the energy from the chemical interaction between different kinds of minerals, and others that live off the energy from the radioactive decay in rocks. The ecosystems are completely independent of oxygen or organic material produced by photosynthesis at Earth's surface. These extraordinary microbial ecosystems are models for life that might be present inside Enceladus today.

There are three such ecosystems found on Earth that would conceivably be a basis for life on Enceladus. Two are based on methanogens, which belong to an ancient group related to bacteria, called the archaea -- the rugged survivalists of bacteria that thrive in harsh environments without oxygen. Deep volcanic rocks along the Columbia River and in Idaho Falls host two of these ecosystems, which pull their energy from the chemical interaction of different rocks. The third ecosystem is powered by the energy produced in the radioactive decay in rocks, and was found deep below the surface in a mine in South Africa.

So the evidence points to the feasibility of life in Enceladus. But how would it get its start? A major problem in answering that question is that we don't know how life originated on Earth, nor have we been able to reproduce Earth's first spark of life in the laboratory. But here's the good news: there are a lot of theories for how life originated on Earth. Now the question is -- do they apply to Enceladus?

Two of the theories for the origin of life on Earth do seem to apply to Enceladus--the "primordial soup" theory and the deep sea vent theory. 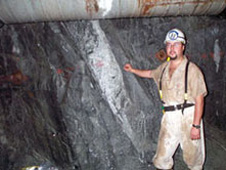 About two miles below the ground in a South African gold mine, scientist Duane Moser stands next to the fracture zone (white area) where he and Li-Hung Lin found bacteria that live in an ecosystem driven by radioactive decay with no oxygen, no light and no organic input. Image courtesy of Li-Hung Lin.
? Browse version of image
The Primordial Soup Theory
The theory that the origin of life occurred in a soup of organic material that came together from non-biological sources traces back to Charles Darwin, and was demonstrated in a famous experiment in 1953 when the chemists Stanley L. Miller and Harold C. Urey cooked up a primordial soup of chemicals thought to have been present on early Earth before life began. A spark, simulating lightning, was passed through this highly reduced mixture of methane, ammonia, water vapor and hydrogen. Within two weeks, a few amino acids, some of the building blocks of life, had formed in the soup. While Miller and Urey did not actually create life, they demonstrated that very complex molecules ? amino-acids ? could emerge spontaneously from simpler chemicals.

On Earth, it's possible that the organic ingredients of the soup were produced from existing materials on the early Earth. Another theory is that the right soup mix ingredients arrived as incoming comet material and interplanetary dust.

Organic chemicals were part of the raw material from which Enceladus and Saturn's other moons formed. The origin of Enceladus' heat is less clear, but there are several possibilities that could have given Enceladus a layer of liquid water that persists today. Early on, it could have been heated by decay of short-lived radioactivity in rocks, with the heating prolonged by tidal influences. Or perhaps an earlier oblong orbit could have brought more tidal heating than exists there today. A past tidal relationship with another moon could have caused the heat. Another theory says the heat could have been produced from a process called serpentization, where chemical binding of water and silicate rock could occur at the upper layer of the moon's core. This increases the volume of the rock and creates energy in the form of heat.

Any of these heating mechanisms might have created a liquid subsurface aquifer solution rich in organics, allowing Enceladus to serve up a suitable prebiotic soup.

The Deep Sea Vent Theory
The deep sea vent theory for the origin of life on Earth might apply to Enceladus as well. In this scenario, life on Earth began at the interface where chemically rich fluids, heated by tidal or other mechanisms, emerge from below the sea floor. Chemical energy is derived from the reduced gases, such as hydrogen-sulfide and hydrogen coming out from the vent in contact with a suitable oxidant, such as carbon dioxide. Hot spots on an Enceladus sea floor could be locales for this type of process.

We don't know how long it takes for life to start when the ingredients are there and the environment is suitable, but it appears to have happened quickly on Earth. So maybe it was possible that on Enceladus, life started in a "warm little pond" below the icy surface occurring over the last few tens of millions of years.

For life to persist once it has been established requires an environment of liquid water, the essential elements and nutrients, and an energy source. At Enceladus, we have evidence for liquid water, but we don't know its origin. We have observed simple organic chemicals there, and the March 12 close flyby indicates there are some complex organic chemicals, as well. An energy source of some sort is producing geysers. As Cassini's exploration continues, we're seeking to bring together more pieces of this intriguing puzzle.

The first step toward answering the question of whether life exists inside the subsurface aquifer of Enceladus is to analyze the organic compounds in the plume. Cassini's March 12 passage through the plume provided some measurements that help us move toward an answer, and preliminary plans call for Cassini to fly through the plume again for more measurements in the future. Ultimately, another mission in the future could conceivably land near the plume or even return plume material to Earth for laboratory analysis.

Chris McKay of NASA's Ames Research Center is an astrobiologist involved in the search for environments on other worlds where life may have evolved. Dennis Matson is the project scientist of the Cassini Mission to Saturn.