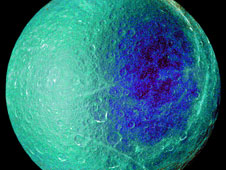 Hemispheric color differences on Saturn's moon Rhea are apparent in this false-color view from NASA's Cassini spacecraft. This image shows the side of the moon that always faces the planet. Image Credit: NASA/JPL/SSI
 Full image and caption
› Browse version of image
PASADENA, Calif. -- Newly released for the holidays, images of Saturn's second largest moon Rhea obtained by NASA's Cassini spacecraft show dramatic views of fractures cutting through craters on the moon's surface, revealing a history of tectonic rumbling. The images are among the highest-resolution views ever obtained of Rhea.

"These recent, high-resolution Cassini images help us put Saturn's moon in the context of the moons' geological family tree," said Paul Helfenstein, Cassini imaging team associate, based at Cornell University, Ithaca, N.Y. "Since NASA's Voyager mission visited Saturn, scientists have thought of Rhea and Dione as close cousins, with some differences in size and density. The new images show us they're more like fraternal twins, where the resemblance is more than skin deep. This probably comes from their nearness to each other in orbit."

Cassini scientists designed the March 2010 and November 2009 encounters in part to search for a ring thought to encircle the moon. During the March flyby, Cassini made its closest- approach to Rhea's surface so far, swooping within 100 kilometers (62 miles) of the moon. Based on these observations, however, scientists have since discounted the possibility that Rhea might currently have a faint ring above its equator.

These flybys nonetheless yielded unique views of other features on the moon, including ones that are among the best ever obtained of the side of Rhea that always faces away from Saturn. Other views show a web of bright, "wispy" fractures resembling some that were first spotted on another part of Rhea by the two Voyager spacecraft in 1980 and 1981.

At that time, scientists thought the wispy markings on the trailing hemispheres  the sides of moons that face backward in the orbit around a planet  of Rhea and the neighboring moon Dione were possible cryovolcanic deposits, or the residue of icy material erupting. The low resolution of Voyager images prevented a closer inspection of these regions. Since July 2004, Cassini's imaging cameras have captured pictures the trailing hemispheres of both satellites several times at much higher resolution. The images have shown that the wispy markings are actually exposures of bright ice along the steep walls of long scarps, or lines of cliffs, that indicate tectonic activity produced the features rather than cryovolcanism.

Data collected by Cassini's imaging cameras in November 2009 showed the trailing hemisphere at unprecedented resolution. Scientists combined images taken about one hour apart to create a 3-D image of this terrain, revealing a set of closely spaced troughs that sometimes look linear and sometimes look sinuous. The 3-D image also shows uplifted blocks interspersed through the terrain that cut through older, densely cratered plains. While the densely cratered plains imply that Rhea has not experienced much internal activity since its early history that would have repaved the moon, these imaging data suggest that some regions have ruptured in response to tectonic stress more recently. Troughs and other fault topography cut through the two largest craters in the scene, which are not as scarred with smaller craters, indicating that these craters are comparatively young. In some places, material has moved downslope along the scarps and accumulated on the flatter floors.

A mosaic of the March flyby images shows bright, icy fractures cutting across the surface of the moon, sometimes at right angles to each other. A false-color view of the entire disk of the moon's Saturn-facing side reveals a slightly bluer area, likely related to different surface compositions or to different sizes and fine-scale textures of the grains making up the moon's icy soil.

The new images have also helped to enhance maps of Rhea, including the first cartographic atlas of features on the moon complete with names approved by the International Astronomical Union. Thanks to the recent mission extension, Cassini will continue to chart the terrain of this and other Saturnian moons with ever-improving resolution, especially for terrain at high northern latitudes, until 2017.

"The 11th of January 2011 will be especially exciting, when Cassini flies just 76 kilometers [47 miles] above the surface of Rhea," said Thomas Roatsch, a Cassini imaging team scientist based at the German Aerospace Center Institute of Planetary Research in Berlin. "These will be by far the best images we've ever had of Rhea's surface  details down to just a few meters will become recognizable."

The Cassini-Huygens mission is a cooperative project of NASA, the European Space Agency and the Italian Space Agency. The Jet Propulsion Laboratory, a division of the California Institute of Technology in Pasadena, manages the Cassini-Huygens mission for NASA's Science Mission Directorate, Washington. The Cassini orbiter and its two onboard cameras were designed, developed and assembled at JPL. The imaging team is based at the Space Science Institute in Boulder, Colo.Jia-Rui C. Cook 818-354-0850
Jet Propulsion Laboratory, Pasadena, Calif.
jccook@jpl.nasa.gov