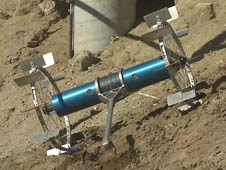 
PASADENA, Calif. -- Engineers from NASA's Jet Propulsion Laboratory and students at the California Institute of Technology have designed and tested a versatile, low-mass robot that can rappel off cliffs, travel nimbly over steep and rocky terrain, and explore deep craters.

A Web video showing an Axel test-run at the JPL Mars yard is online at:
www.jpl.nasa.gov/video/index.cfm?id=806 .

"Axel extends our ability to explore terrains that we haven't been able to explore in the past, such as deep craters with vertically-sloped promontories," said Axel's principal investigator, Issa A.D. Nesnas, of JPL's robotics and mobility section. "Also, because Axel is relatively low-mass, a mission may carry a number of Axel rovers. That would give us the opportunity to be more aggressive with the terrain we would explore, while keeping the overall risk manageable."

The simple and elegant design of Axel, which can operate both upside down and right side up, uses only three motors: one to control each of its two wheels and a third to control a lever. The lever contains a scoop to gather lunar or planetary material for scientists to study, and it also adjusts the robot's two stereo cameras, which can tilt 360 degrees.

Axel's cylindrical body has computing and wireless communications capabilities and an inertial sensor to operate autonomously. It also sports a tether that Axel can unreel to descend from a larger lander, rover or anchor point. The rover can use different wheel types, from large foldable wheels to inflatable ones, which help the rover tolerate a hard landing and handle rocky terrain.

Nesnas co-leads the project with Joel Burdick, a mechanical and bioengineering professor at Caltech, who supervises a handful of Caltech graduate and undergraduate students working on the rover system. Last fall, the JPL-Caltech team demonstrated Axel at the annual Smithsonian Folklife Festival in Washington, which showcased NASA for the agency's 50th anniversary.

"Collaboration with Caltech has been key to the success of this project," Nesnas said. "The students contributed significantly to the design of the tethered Axel. Their creative work enabled us to analyze, design and build new wheels, sampling tools and software. The students also played a key role in field-testing this robot. Without them, we would not have been able to accomplish such goals, given our limited resources."

More information on Axel is at:
http://www-robotics.jpl.nasa.gov/systems/system.cfm?System=16 and at http://robotics.caltech.edu/~pablo/axel/home.html .