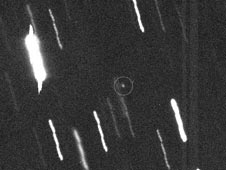 PASADENA, Calif. -- The Near-Earth Object Program Office at NASA's Jet Propulsion Laboratory in Pasadena, Calif., has not changed its current estimates for the very low probability (1 in 45,000) of an Earth impact by the asteroid Apophis in 2036.

Contrary to recent press reports, NASA offices involved in near-Earth object research were not contacted and have had no correspondence with a young German student, who claims the Apophis impact probability is far higher than the current estimate.

Therefore, consideration of this satellite collision scenario does not affect the current impact probability estimate for Apophis, which remains at 1 in 45,000.

NASA detects and tracks asteroids and comets passing close to Earth. The Near Earth Object Observation Program, commonly called "Spaceguard," discovers, characterizes and computes trajectories for these objects to determine if any could be potentially hazardous to our planet.