Grow Text SizeShrink Text Size
What Have We Learned From the Voyager Mission? 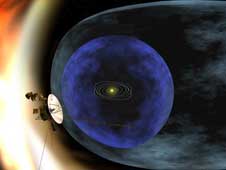 This artist's rendering depicts NASA's Voyager 2 spacecraft as it studies the outer limits of the heliosphere - a magnetic 'bubble' around the solar system that is created by the solar wind. Image credit: NASA/JPL 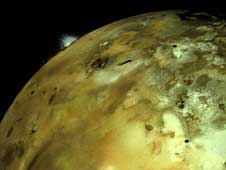 A volcanic eruption on Jupiter's moon Io. Image credit: NASA/JPL
Full image and caption A thirteen-year-old student had an assignment to learn about the Voyager Mission. Here are his questions: What do you know about the Voyagers? What have they discovered since they were sent into the solar system and what do you want them to find?

Two spacecraft, named Voyager 1 and Voyager 2, were launched in 1977. The main mission for the twin spacecraft was to study Jupiter and Saturn. The greatest surprise revealed by the mission at Jupiter was probably the discovery of active volcanoes on Jupiter’s moon Io. At Saturn, the spacecraft gave close-up views of the ringed planet.

After studying Saturn, Voyager 1 began a journey that will one day take it outside of our solar system. Voyager 2 continued on to Uranus and Neptune. As of 2010, it is the only spacecraft to have visited these distant planets.

To answer what we want the Voyagers to find, it is exciting for scientists to receive information from places humans have never been.

The Voyager Mission Web site has more than 30 years of information! Go to http://voyager.jpl.nasa.gov .
› Back To Top