Grow Text SizeShrink Text Size
Have Telescopes Changed Our View of the Universe? 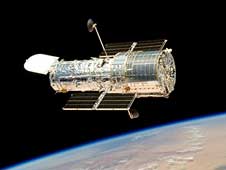 NASA's Hubble Space Telescope drifts above Earth, May 19, 2009. Image credit: NASA
Full image and caption Students in a New Jersey middle school are working on a history of innovation project and asked the following questions:

1. How has the telescope changed the scientific view of our universe?
2. Would the world be behind technologically if the telescope had not been used to research the heavens?
3. What will newer, better telescopes reveal?

2. To answer the second question, consider what the world would be like if we had not pursued the research of the stars in the ways we have. In earlier centuries, ideas about the world and the universe were often shaped by religious beliefs or by myth. As time has progressed, scientific discoveries have became more accepted. Ultimately, technology has become more and more accepted, as has science.

3. Modern telescopes like NASA's Hubble Space Telescope, provide evidence of billions of galaxies, each containing billions of stars like our sun. Some new telescopes allow us to study objects in the universe by detecting the heat or radio waves or X-rays they emit. Telescopes are now discovering planets around other stars. Future telescopes will be useful to answer a fundamental human question: "Are we alone in the universe?" So far, only large and hot planets have been discovered, but it is likely that Earth-like planets will be discovered in the next few years.

A few sites to visit for more information about telescopes are: