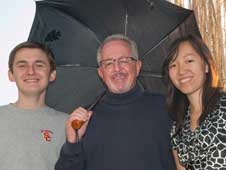 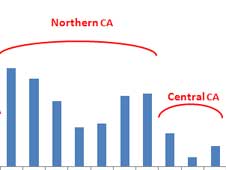 Overall changes in annual rainfall in 22 selected climate stations representing diverse California and Oregon climates. The change in precipitation is region-specific, with Northeast Oregon and Northern California showing a dramatic increase in annual rainfall since measurements began. The mountainous regions of Eastern Oregon and Northeastern California and the drier regions of Central and Southern California show a comparative lack of change or slight decrease over time. The significance is that the wettest regions of the dataset are getting wetter, while the drier ones continue to get drier. 1925 was used as a beginning year for trend calculation because most stations began regular data collection around that year. Image credit: NASA/JPL
Full chart Environmental biology students Ann Bui and Dan Killam roll up their proverbial sleeves every time they come to JPL. The two undergraduates are culling through 80 years of daily rain reports from weather stations around California. Their goal: To look for trends in rainfall patterns. Their findings are pointing to an impact from climate change.

Bui, a senior at California State Polytechnic University, Pomona, and Killam, a sophomore at the University of Southern California, are both interns at JPL through the NASA Space Grant program. Space Grant is a national network of 52 state organizations that work with colleges and universities that have strong interests in aeronautics, space science and technology. The students started working together this past summer and have returned for a second stint this fall. JPL oceanographers Bill Patzert and Josh Willis are their mentors.

JPL: Students need to propose a research topic when they apply for Space Grant internships. What was your topic?

Dan: Initially we were mapping rainfall patterns in California, but the more we looked at the data, the more we realized that the patterns were changing , developing trends, during the 20th Century. Now we're trying to see whether these trends in California rainfall are a consequence of climate change.

JPL: What are you finding?

Dan: In northern California, we're seeing more days of rain per year now than we did in the earlier part of the last century, with an increase of as much as 10-15 days of additional rainfall per year. But in central California, the trend moderates and tends to decrease as you move farther southwards. In southern California, we see small to relatively large decreases over time.

Ann: The data show that the amount of rainfall per day is increasing. There is a general trend toward less drizzle (less than half an inch a day) and more days of consistent, moderate rainfall (more than half an inch a day) in many stations statewide, especially Northern California. It's raining harder now than 80 years ago. One of our objectives is to figure out exactly why these regional disparities exist. We're also seeing seasonal change in some stations -- we are getting rain later in the year. Instead of the rainy season starting in October, nowadays it starts in November or December. Based on these preliminary findings, we're doing calculations to see whether this trend is statewide or local. If the rainy season is getting shorter, this would have big implications for water management.

JPL: Why do you think these rainfall patterns relate to climate change?

Dan: As the atmosphere grows warmer, its capacity to hold water vapor grows as well, perhaps leading to more days of heavy precipitation. Specifically correlating this trend to global warming is a challenge worthy of a doctoral thesis, so we mainly focused on finding trends in the data that others had not. The funny thing about precipitation is that it's not as "in your face" as temperature trends are, so it's harder to connect the dots.

JPL: How are you going about your research?

Dan: There are hundreds of weather data stations all along the Pacific Coast and we found 20 to 25 stations that have 80 years of good daily data that we could use to extract a trend.

Ann: So we're really going through a lot of data - we get it from the National Climatic Data Center Web site (http://www.ncdc.noaa.gov/oa/ncdc.html). We get piles and piles of numbers from the Web site and put them into a spread sheet and then start slicing and dicing the data in different ways.

JPL: Besides looking at all those numbers, have there been other challenges?

Ann: There are a lot of variables in a coastal state. Plus El Niño makes a big impact in California, as it did in 1998. We saw a lot of rain that year - much more than usual.

Dan: Our mentors, Bill Patzert and Josh Willis, both oceanographers and climatologists here at JPL, taught us that we really have to look at a long data set or we might be thrown off. Most recently they taught us about something called the Pacific Decadal Oscillation. It's a periodic effect. For 20 years or so, this larger dynamic in the Pacific causes temperatures and precipitation to be higher than normal, and this is influencing our area. The reason we're so emphatic about having long data sets is because we need to average over the effect of that cycle. If we look at too short a time frame, any climate change trends are masked or biased by this effect.

JPL: What's next? Do you want to do more research along these lines?
Dan: We haven't formally published anything but we're trying to work towards that. Some of the stuff we're working with is the stuff people spend their whole doctoral degree researching.

Ann: We'd also like to try for another term with the same mentors but change the variables. We want to extend our findings farther north up the Pacific coast to see if other coastal states have the same trends, say Oregon or Washington state.

Ann: My friends think our findings are amazing. They didn't realize this was happening.

Dan: Even though the initial steps of finding the data, organizing it and cleaning it up can be incredibly tedious at times, the reward of discovering trends common to several stations is definitely worth it. It's kind of thrilling to know that you're investigating something that other people haven't looked at before.

Dan Killam started interning at JPL as a high school student in the Space Grant program, returning to the program in summer and fall 2009. Ann Bui came to JPL in January 2009 as part of the Student Independent Research Intern (SIRI) program. She then returned in the summer and fall as a Space Grant student.