Grow Text SizeShrink Text Size
What Is a Space Probe? 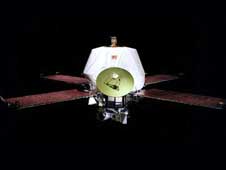 A probe is a spacecraft that travels through space to collect science information. Probes do not have astronauts. Probes send data back to Earth for scientists to study.

Once probes could reach space, the two countries started sending probes to fly past the moon and other planets. Mariner 2 was the first probe to study another planet. On Dec. 14, 1962, Mariner 2 flew past the planet Venus. It confirmed that Venus is very hot.

A different probe, called Mariner 4, was the first probe to snap a picture of a planet. On July 14, 1965, Mariner 4 flew past Mars. Its images of Mars showed a cold, cratered, moon-like surface.

In 1971, Mariner 9 arrived at Mars and became the first probe to orbit, or circle, another planet. Mariner 9 took a picture of Mars that showed the largest volcano in the solar system.

Many probes study Earth or measure properties of space. Other probes use telescopes or other instruments to study planets, stars, and galaxies that are far away. Probes that travel to other planets have changed from simple machines that could study a few features of a planet to sophisticated probes that travel great distances to study a wide range of features on planets, moons, asteroids and comets. We tend to call these more sophisticated probes spacecraft, orbiters, landers and rovers.

One of the most famous probes is Voyager 1. It has traveled further in space than any human-made object. It launched into space in 1977. Voyager 1 flew past Jupiter and Saturn and then headed for the edge of our solar system. As of Feb. 1, 2010, the spacecraft was 16.8 billion kilometers (about 10.4 billion miles) from Earth.

For more information about JPL probes and missions go to http://www.jpl.nasa.gov/missions/index.cfm .

For a timeline of robotic exploration, go to http://sse.jpl.nasa.gov/history/index.cfm .

JPL Homework Help offers guidance on concepts in Earth and space science. Due to demand, we cannot guarantee that your question will be answered.

To submit a question, email education_at_jpl.nasa.gov.