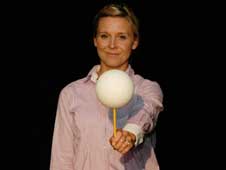 JPL's Allison Sengstacken demonstrates steps 1 through 4 to show how a student would turn in relation the to light source, or sun. Image credit: NASA/JPL
Click here for image to show full demonstration 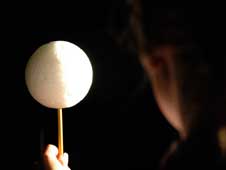 From a student's perspective, this is how the first quarter moon appears (see step 2 in the image to the left). Image credit: NASA/JPL 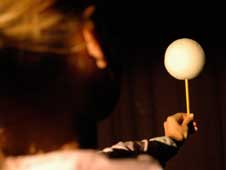 In step 3, students have their back to the "sun." They should see a fully illuminated styrofoam ball, or "moon" in this position. Image credit: NASA/JPL This moon phase activity allows students to "act out" the phases of the moon in about 30 minutes. As you do the activity, remind students that what they are doing in 30 minutes takes the moon about 30 days to do: Complete one full circle around Earth.

In preparation for this activity, discuss moon phases with students. It is very helpful if students can make their own moon observations for one month prior to and after this exercise. (You could break up the viewing by assigning teams to different weeks.) You can also watch a brief video overview of the moon or watch the July 2007 What's Up video to learn more about the moon.

One light-colored sphere and one pencil, per student. Try white styrofoam balls, 5 centimeters (2 inches) or larger
One larger white sphere (for the teacher only) and one pencil
Light source, such as a lamp - shade removed - with a bright, clear, incandescent bulb (100 watts or higher)
Dark room

-- Place the lamp in the middle of the room.
-- Have each student poke a hole into their sphere with their pencil and hold the pencil, with sphere attached, in their left hand. They should be holding what looks like a spherical lollipop.
-- Explain to students that the bulb is the sun, each of their spheres is the moon and each student is Earth.

Step 1: New Moon: To begin, students should face the lamp and extend the sphere directly in front of them, raising the sphere enough so they can also see the lamp. This view simulates a new moon. As students look at their moon, they will see that the sunlight is shining on the far side, opposite their view of the moon.  From Earth, the new moon is not seen.

Crescent Moon: Keeping their arms extended in front of their bodies, have students turn their body and extended arm counterclockwise about 45 degrees. They should face their balls and observe what they now see. They should see the right-hand edge of the sphere illuminated as a crescent. The crescent starts out very thin and fattens up as the moon moves farther away from the sun (as the student begins to turn in a circle).

Step 2: First Quarter: Have students continue turning left so their moon and body are now 90 degrees to the left of their original position. The right half of the moon should now be illuminated. This phase is called the first quarter.

Step 4: Third or Last Quarter: Keep students turning, with arms extended, so they are now three-quarters of the way around from their original position. This is the third, or last, quarter. They should observe that the opposite side from the first quarter moon is now illuminated.

Step 5: Return to New Moon: The continued counterclockwise movement brings a thinning crescent and finally a return to a new moon.