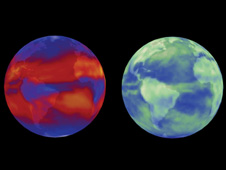 Left: April 2001; Heat given off by the Earth's surface and atmosphere and pumped out into space. Right: April 2001; Sunlight reflected back out to space by the oceans, land, clouds and aerosols. Image credit: NASA/Langley and NASA/Goddard 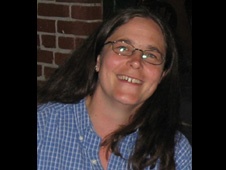 Annmarie Eldering is a NASA/JPL research scientist who specializes in clouds, aerosols and trace gases in Earth's atmosphere. Image credit: NASA/JPL To celebrate Earth Day 2011, the Education Office at NASA's Jet Propulsion Laboratory in Pasadena, Calif., is hosting a live Web video chat where your students can ask a NASA/JPL scientist questions emailed in advance.  Questions should be on the topic of Earth science. Our chat is best suited for students and afterschool groups in grades 4 - 6.

Our guest will be NASA/JPL research scientist Annmarie Eldering, who specializes in clouds, aerosols and trace gases in Earth's atmosphere. She is currently the deputy project scientist for the Orbiting Carbon Observatory-2, a NASA satellite mission now in development that will measure atmospheric carbon dioxide, the leading human-produced greenhouse gas driving changes in Earth's climate.

The live video chat will be streamed at http://www.ustream.tv/nasajpl2 on Thursday, April 21 at 10 a.m. PDT/ 1 p.m. EDT. The Web page is open to the general public. The program will be archived on the same page.

Classrooms are strongly encouraged to visit the Web page in advance to make sure their school provides access. We will run a video and audio feed all day on Wednesday, April 20 (starting at 9 a.m. PDT) so we also strongly suggest schools visit the page that day.

Questions should be emailed to jplspaceeducation@gmail.com and must be received by Tuesday, April 19, by noon PDT. Questions should include school or group name, city and state. Due to resources, we cannot answer all questions but will make every attempt to answer at least one question per class.

An example of our chats can be seen here (recent chat on earthquakes): http://www.ustream.tv/recorded/13400346 .

Classrooms are also invited to share how they help Earth on this short interactive: http://www.jpl.nasa.gov/education/earthday/earthdayflash.cfm .

Happy Earth Day!
› Back To Top