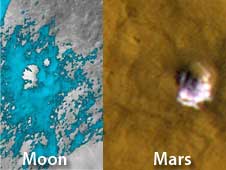 On the left, an infrared view showing the distribution of water-rich minerals (light blue) around a small crater on the moon. On the right, a view indicating that fresh impact cratering has excavated water ice from just beneath the surface of Mars.
› News release about Moon water molecules
› New release about Mars ice Craters are making "an impact" as they play a role in space news today! Three spacecraft have discovered water molecules on the moon - some in or near craters. Over at Mars, the Mars Reconnaissance Orbiter has found fresh impact cratering that has excavated water ice just beneath the surface of Mars.

To complement these stories, we have a couple of cratering activities to recommend for grades 5 - 12. All of these activities meet standards in Earth and Space Science, and Mathematics.

Impact Cratering
http://teacherlink.ed.usu.edu/tlnasa/units/PlanetaryGeology/7.pdf
This is a good introduction to impact craters. Teachers and students use small projectiles to create craters of different sizes. Students learn how the projectile's mass and velocity help determine the size of the crater. Students also identify zones in the crater.

Comparative Cratering Processes
http://teacherlink.ed.usu.edu/tlnasa/units/PlanetaryGeology/8.pdf
This activity is more involved. Student teams create and record images of three types of impact craters: those formed from an impact, a volcanic explosion and a volcanic eruption.

Impact Cratering on a Rainy Day
http://teacherlink.ed.usu.edu/tlnasa/units/PlanetaryGeology/9.pdf
We've seen plenty of pictures of a pockmarked moon. Now it's the students' turn to create their own multi-cratered surface. This activity is designed to teach how impacts can transform a planet or moon surface again and again.

Stay Tuned for a Moon Impact
While the activities above deal with natural impacts, NASA's Lunar Crater Observing and Sensing Satellite (LCROSS) mission will be creating two planned impacts with the moon on Oct. 9, 2009, at 4:30 a.m. PDT. The debris plumes are expected to be visible from Earth telescopes 10 to 12 inches and larger.

More Resources
You can find the entire NASA Planetary Geology Guide at the following links:
http://teacherlink.ed.usu.edu/tlnasa/units/PlanetaryGeology/
http://www.nasa.gov/audience/foreducators/topnav/materials/listbytype/Planetary.Geology.html
› Back To Top